What is the classic Swiss dinner

The abundance of Swiss cuisine

Swiss cuisine is extremely varied. Not only every canton, but even every town or rural area has its own local specialties that have specific taste, flavors, used products and spices, as well as cooking method.

This variety is a result of a few things. First of all, there are three main ethnic communities in Switzerland, which are generally located in different parts of the country. So in the northern and central regions are the German speakers /over 60 %/. 19 % are French speakers, they are located in the western parts of the country.

The Italian communities are in the southern regions and they are approximately 8%. This ethical diversity explains the abundance of Swiss cuisine as it combines German, French and Italian culinary traditions. However, they are naturally adapted to the geographical characteristics of the respective regions. Moreover, these regions for centuries have developed in a specific and conservative way because of the difficult alpine terrains.

In many places there were only family farms located far away from each other. However, people exchanged some traditions and in some cases is difficult to determine whether the dish is more “French”, “German” or “Italian”.

The main products used in Swiss cuisine are:

From the cultivated meats tourists are impressed by the horse meat, which is not quite traditional for Europe. The forests offer game meat, as the deer meat is very popular.  Of course, here you can try also rabbit, ducks and so on. thanks to the numerous lakes there is a rich variety of fish dishes.

A product that is widely used in Swiss cuisine is the cheese – because it can be stored for a longer period of time. Apart from the fact that the most popular Swiss dishes are based on cheeses – Fondue and Raclette, cheese is also used for the preparation of soups, it also can be grated and melted on top of meat, potatoes and fried potato “pancakes”, it can be consumed in salads and so on. The country has been producing cheese for centuries, over 150 types. The most popular cheeses are Gruyere, Emmental, Schabziger, Appenzeller and others. 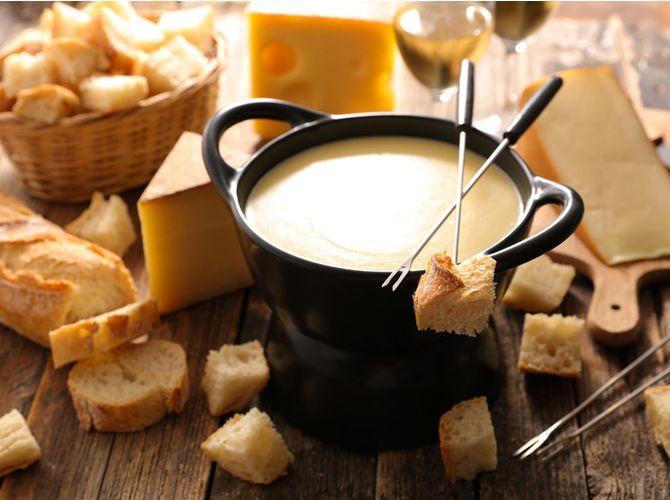 What Swiss people eat during the cold evenings

The warm fondue is a leading dish in the list of classic Swiss dinner food during the cold evenings in the alpine regions. It is made using two or more types of hard cheeses that are cut or grated, then they are gradually melted while stirring in a special pot with dry white wine, to which is also added some fruit brandy.

The goal is to obtain a mixture as a dense mess without lumps, as starch is used to thicken the mixture. After the dish is prepared, people dip hard bread pieces, potatoes, pickes and other vegetables in the mixture. Seasoning is done with garlic, with which the pot is smeared in advance, then are added lemon juice, white and black pepper, nutmeg, and other spices to taste. Here we should mention that there are different variations even in classic fondue.

In Italian communities, for example, milk and eggs can be used instead of wine. Over time, variations of fondue have occurred such as fondue with meat and fish, as they can be fried in oil or cooked in broth for a short time. So different names were created for the different types of fondue: „Chicken fondue“, “Rural fondue”, and so on. And the “icing on the cake” is the Chocolate fondue, which can be consumed both with fresh and dried fruits.

Another dish on the Swiss dinner list is Raclette – the name originates from the semi-hard cheese raclette, which is melted /baked/ and then grated on warm cooked unpeeled potatoes. It is consumed with garnish of pickles and onions, olives and other products.  According to your taste, you can add some meat, vegetables, seafood, etc.

Popular meats for the Swiss dinner are:

Speaking of Swiss specialties, we should mention the alpine tradition of drying meat and the various jerk meats and dried salami. 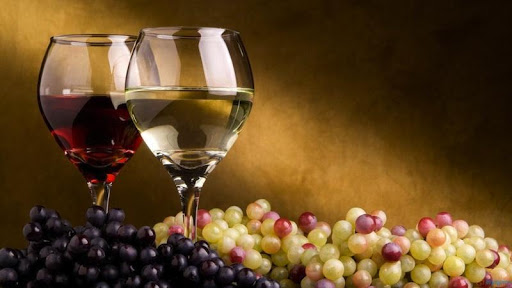 Alpine terrains are not easily workable, but in the territories of today’s Switzerland, vineyards have been grown centuries before the new era. The varieties typical of the valleys and foots of the high mountains, are mentioned in a document, which dates back to the XIV century.

Grapes and vines have been depicted in frescoes almost a century earlier, which is a proof that viticulture was an important livelihood. The varieties cultivated in the country are around 50, as the most popular variety is the red pinot noir, followed by the white dessert chasselas.

Nowadays Switzerland exports a little amount of wine – only 1 percent of wine turnover of trade comes from export. The rest of the wine is for internal consumption, but it is not enough, because more than a half of the consumed wine in the country is imported.  More than 50 percent of the wine produced in Switzerland is red. In fact, Swiss wines are of high quality – they win numerous medals and awards at various exhibitions and competitions. They are fresh, cheerful, as local people say.

The white wines are mainly moscato, chardonnay and others, as they are very aromatic and well balanced. Th most famous white wines are Saint-Saphorin, Dezaley, Fendant. Red wines are flavored with spices, they have notes of pineapple, as well as of black and red fruits, and so on. Some of the best red wines are Pinot Noir, Merlot, Dole. 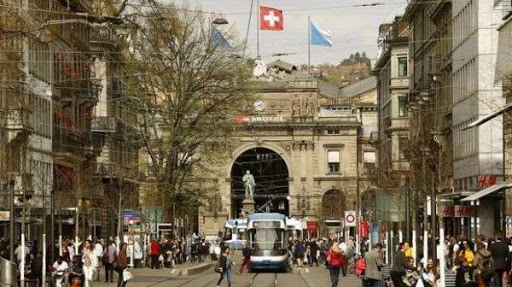 Swiss people have traditions not only in cooking but also in the way of eating. In general, eating in Switzerland is one of the ways to bring together the family and friends, and to make them feel united as a community. This is especially very important for the farms and villages located in the distant alpine regions.

It is not a coincidence that the most popular Swiss dish – fondue gathers everyone at the table, first to cook it and them to consume it from the common pot.

The breakfast is consumed early in the morning, but before lunch there is another one but lighter. The time for lunch itself is “sacred”, and eating can last for more than an hour, even for two hours. Offices and shops even close for lunch. The dinner is consumed early – this is because in the past the farmers had to get up very early in the morning to work, and because the early dinner is part of the traditionally healthy lifestyle of alpine areas. In this sense, over the centuries, Swiss people have found numerous spices and herbs for teas with healing effect – for the heart, liver, gallbladder, with revitalizing or calming effect, and so on, which are still used to the present day.

It turns out, however, that the modern way of living has changed the conservative Swiss people. A governmental study shows that nowadays 7 of 10 Swiss eat out – nearly half of men and approximately 25 percent of women. This applies mostly to lunch – approximately half of the interviewed men and a quarter of women have lunch at the office or in the closest restaurants.

The dinner, however, “brings” Swiss people home, including the young ones. Nearly 60 % of the interviewed women cook warm dinner, and the percent of the cooking men is 45.  During the weekend, naturally, the percentage of people consuming warm food at home increases by 10%.

At the same time, statistics show that men “stay” at home far less than women. Surprisingly, the study also shows that in “milky” Switzerland people are not consuming that much dairy products, nuts, plant oils.  But meat consumption is four times higher than the recommended amount by the nutritionists. For women, meat consumption is two times higher than the recommended.

Men also eat less fruits and vegetables compared to women. But in both women and men there is a highly increased consumption of salty, sweet, fatty – oils, margarines, sauces, creams and so on. Another important study shows that this have led to the overweight of nearly half of Swiss people.