Alpine parts of Switzerland, France and Italy are known all over the world with their picturesque landscapes and magnificent mountain peaks and slopes, which are great for skiing and other winter sports, but also with the delicious cuisine. The centuries-old traditions of the alpine settlements are in the basis of their culinary heritage.

But we all know that what impresses children does not always coincide with what we will like. However, as children can sometimes be capricious, and others even „fastidious“, the traditional cuisine in the Alps hides many surprises that can impress even the most pretentious little kid. 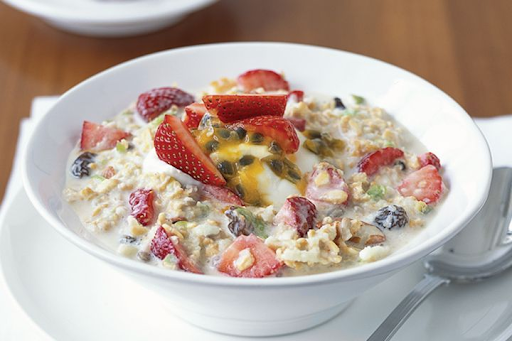 The abundance of different special types of muesli with nuts and seeds make the choice of breakfast for each child easier and enjoyable. Milk in these areas has excellent nutritional and gustatory qualities and is great both as a natural flavor and prepared as a hot chocolate, or flavored with special soluble malty for dairy beverages, which is very popular in the Alps, mostly in Switzerland where the company producer was found in the distant 1904. It is believed that this supplement is not only tasteful, but also beneficial for children, as it supplies them with the basic required doses of the necessary vitamins and minerals, so it is an essential part of the children’s menu among the local population of the Alps.

Turned into yoghurt, alpine cow’s milk can be further combined with a variety of goodies such as honey, fresh or canned fruits, biscuits, and so on. And for the young lovers of proteins, there is a wide variety of omelettes and dishes with bacon and cheeses. Croissants are also a good idea, as well as the fresh pancakes (crepes) or waffles. The Swiss croissants are called „gipfel“. One of the most legendary alpine tastes, especially for children, is the sweet nusgipfel – the croissant with nougat.

The typical for the alpine region Fondue with cheese is not liked by all children, but those who like it will be very happy. The rest of the kids should not be worried – there is no chance to stay hungry in the Alps, where people have specialized in getting nutritious foods even in harsh winter conditions. 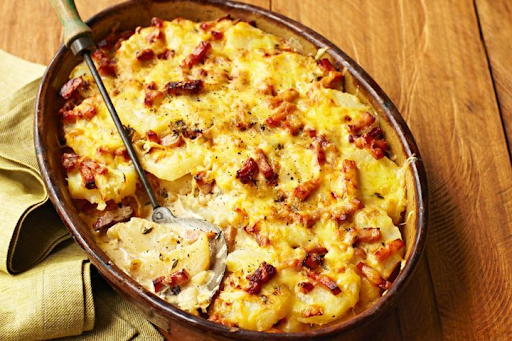 Most restaurants and chalets in the Alpine region offer some of the children’s favorite foods – varied pasta, potato dishes, sausages (called by the French-speaking population „diots“ –„t“ and „s“ are silent at the end of the word). The kids can choose between the classic spaghetti Carbonara, the Crozet pasta, which is typical of the Alps, or Alpine macaroni with potatoes and cheeses… and why not a delicious pizza!

We should not forget about the simpe, but amazing Tartiflet recipe – with bacon, cream, potatoes, cheese Reblochon from Savoy and onion. And if prepared with crozets, the tartiflet becomes a croziflette, which is also an amazing dish for the little ones.

In the Italian Alps in the town of Valpelline (Vapeleuna) in the Aosta valley, is prepared the traditional Valpelinenze soup with abundant amount of melted Fontina cheese. The same cheese is used for the preparation of the soup in other towns, as well as a lot of cow’s butter and Carnaroli rice.

Just be careful because the original recipes for the cheeses soup in other towns contains some nutmeg, which can spoil the taste for some children. If you are in a restaurant and you are about to order this soup for the kids in the group, you should always consult with the waiter about the spices.

Because of the cold climate and the need for solid meals, you will quickly notice that most of the dishes in the Alps do not only contain meat – but it is the predominant ingredient in them. The local stews are, of course, very nice, but there is nothing more satiating and delicious than hot sausages with crispy alpine bread.

Alpine sausages are also prepared with lentils, as well as with spelze (a special local type of pasta), and if your child has a classic taste, you can always bet securely on fried potatoes. Other wonderful combinations, which also appeal to children, are: schnitzel with chips, Swiss bratwurst with steamed potatoes, and so on.

In the area of the Italian and French Alps, the unique taste of sweet chestnuts is highly appreciated by the local gourmands. They are also favorite of the children. There are also recipes for the preparation of roasted chicken and chicken soup – these are loved by kids all over the world.

The popular Alpine delicacy, called Rösti, also enjoys the approval of the small culinary lovers. This dish is famous almost in all countries in the world, as children find it very attractive.

In fact, Rösti contains grated potatoes that are shaped like a pancake and fried in butter. Moreover, Rösti is also the best friend of bacon in the region, which in turn is a favorite food of many kids all over the world.

Also excellent are the alpine dumplings with bacon, the potato ravioli and spinach gnocchi. For kids with a more sophisticated taste, the delicate trout will look like real bliss, or perhaps the tender lamb chop. 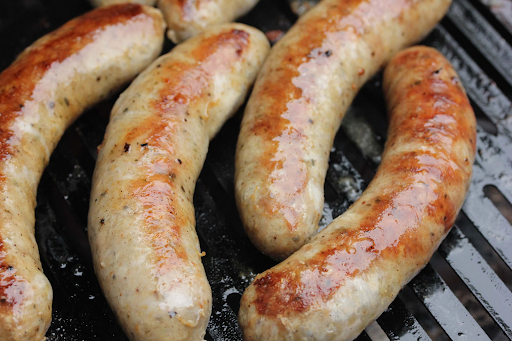 And for those kids who do not like cooked dishes very much, we rely on sandwiches, as we do for our mountain hikes and when we want to spend the entire day on the ski run, so we will not have to go back to the station for lunch. Fortunately, the wonderful variety of alpine products allows even this banal food to become a real feast. You can prepare the sandwiches with schnitzel, bratwurst, sauerkraut, pickles, mustard, etc.

Children love the Swiss cheese Provalone, especially fried. It can be consumed as a dish with French fries, for example, or in the form of a sandwich filling, and is always great to taste. Another option for fans of melted cheeses is the French sandwich croque monsieur – something the Bulgarian princress sandwich.

Perhaps the most important dish for kids is the dessert. One of the emblematic desserts of Savoy Switzerland is the so-called bun. The small fans of fruit temptations can choose apple strudel or plum pie. Also, you will not be wrong if you decide to try the dessert with cream and wild forest strawberries.

Of course, the star of the alpine desserts for kids is His Majesty the Swiss chocolate. Thanks to the alpine milk contained in it, this chocolate has an extremely rich taste – whether in the form of a mousse or as a filling of pastry products, in a liquid or solid form. Children also are very impressed by the typical Swiss chocolate fondue. In addition, be sure to have a piece of chocolate in your pocket when you go skiing or mountain hiking with your kids.

One of the most amazing alpine desserts that your children will simply love is the Brioche from Saint-Jean-sur-Gué – a former settlement of the Savoy area, nowadays in Auvergne-Rhône-Alpes in France. From the beginning of 2019, it became the center of the new Saint-Jean-les-Village municipality, which also includes Gresin and Saint Maurice de Rototron.

Brioche from Saint-Jean-sur-Gué is almost the same as the ordinary. The difference is that it contains more sugar and whole red candies, which remain semi-melted inside the dough.

Your children should not miss to try the traditional Alpine homemade cake if they have the chance. Another temptation that will appeal to the kids is the tart with blueberries, which is very common in the region.

Children who are allergic to gluten can consume a pancake prepared from buckwheat that is called „galette“, which can also be combined with various fillings to taste.

2019-06-05
Previous Post: What is the classic Swiss dinner
Next Post: How Fondue has become a traditional Swiss dish