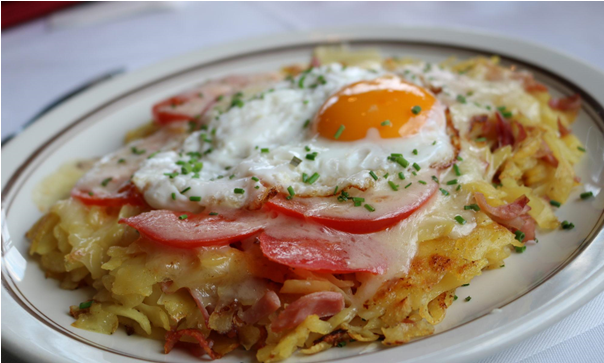 Typical dishes for the Alpine region

We connect the idea of ​​the Alps with snow, skiing and breathtaking landscapes. We must also add to the advantages of the region the unique delicious local cuisine.

It is an amazing blend of the culinary traditions of several European countries – Austria, Switzerland, Germany, France and Italy. The locals have adapted their diet to the harsh mountain conditions. The result is nutritious, energy-filled meals.

Many focus on meat, milk and dairy products. To these we must add eggs, potatoes, mushrooms, cabbage, legumes, etc. The food is saturated, tasty and useful because of its quality products, mainly locally produced. People in the Alps respect the traditions and pass on their family recipes from generation to generation.

Every region and even the city prides itself on its culinary masterpieces. For those who enjoy a culinary experience, even for those who do not go skiing, it is good to know what are the typical dishes of the Alpine region. 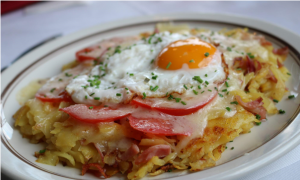 We start with the presentation of two Swiss dishes that have already become an emblem for Alpine cuisine. In general, the culinary tradition in Switzerland is quite conservative and most of the country’s typical dishes are prepared according to old recipes.

The common thing between fondue and raclette is that they originate in the French-speaking part of the country and are prepared based on dairy products.

Fondue is a delicate Swiss cheese, slowly melted over low heat. As usual, there are at least two legends about its origin. In the former are involved Swiss shepherds who brought with them the most common foods  in the mountain – bread and cheese and wine for warming. In an attempt to make hardened cheese more enjoyable to eat, some inventive great-grandfather of the modern Swiss decides to melt it in a saucepan over fire, adding wine to it.

In the resulting hot aromatic mixture, shepherds began to immerse pieces of bread. This theory is considered to be the most probable history of the origin of the Swiss fondue, but there is another.

In the 13th century, a monk named Vakarinus decided to circumvent the ban on eating hard cheese during Lent. It heats the product to a liquid consistency and presents it as ‘cheese soup‘.

The rest of the monks argued for a long time how far such a dish differed from the forbidden cheese, but in the end the lackeye won and allowed it to be eaten on fasting. 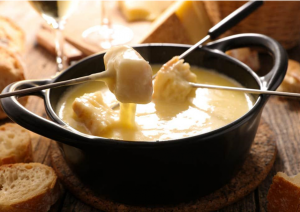 Whatever its history, it is not surprising today that the Swiss national dish has earned a worldwide reputation and its fame far exceeds the Alps and even Europe. The preparation of fondue, however, has its subtleties.

It is not enough to just melt a piece of cheese and dip a piece of bread in it. First you need to have the right utensils. The fondue is cooked in a special container called kakelon, which is an enameled, cast iron or ceramic pot. A special fork with a round handle and three teeth is used for its consumption.

Particularly important is the selection of cheeses, typically using 2 to 5 types.There are many options, but one popular combination is Emmental and Gruyere, melted with dry white wine and the addition of a bit of the aromatic Kirsch brandy.

And after we have got everything we need, the cachelon is placed on the table and melted white wine cheeses and indescribable aromas spread around it. Finally, all melt bits of bread into the mixture.

This is how fondue nourishes and brings people together. Nowadays, the variety of fondue is very large, with more variants with meat or fish and sweet fondue with chocolate added to the cheese classics. 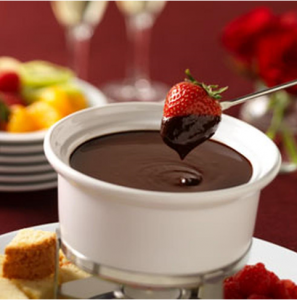 Another feature of the Swiss Alps – raclette, is also cooked directly on the table and still uses local cheeses. And it is especially suitable for cold winter evenings. When cooked, the cheese is warmed on one side and bent, and the melted part is scraped with a special spatula directly on the plate on cooked potatoes, pickled cucumbers and sometimes ham.

The cheese that Raclette is made from has the same name. The high fat content in its composition allows it to melt quickly and its structure becomes creamy.

Nowadays, for the preparation of the raclette is used a special appliance, also called a raclette. It consists of an electric grill and a heating plate. It is placed on the table at which the guests are seated, and a delicious meal can begin. 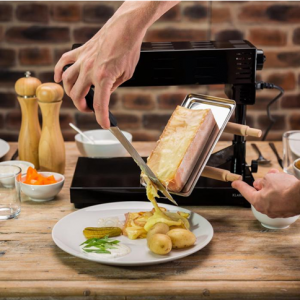 Now comes a very simple and delicious potato dish. It is thought to originate from the Bern region. The Swiss claim the raclette is their patent, but two more Alpine countries – Germany and Austria – consider it part of their national cuisine.

Roots are prepared in all three Alpine countries, but there are some details that set them apart. Some recipes use raw grated potatoes, in others – boiled.

There are variations in shape as well – they can be oval schnitzels or round like big potato pancakes. They can also be fried or baked. What is invariable is their great taste.

Slices are prepared by first grinding raw or cooked potatoes. The mixture is then formed as a large circle or as a schnitzel 1-2 cm thick.

Potatoes can be added to bacon, cheese, cream, milk, leeks or onions, cheese, spices and even apples. Can be served with one fried egg on top. 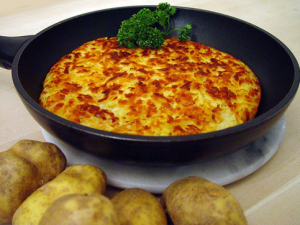 Here’s a recipe for groceries that you can easily prepare at home:

The potatoes are boiled and cooled. Shredded on a large grater. The bacon is cut into small pieces. Then mix it with the potatoes and season with salt. Fry the mixture in a pan on one side only,  forming it like a large pancake. Then turn it over and toss it in the oven to bake.

Beat eggs, cream and milk, Flavor them with salt and nutmeg, beat and pour over your hot slices. Bake for a while. You can add leeks or onions to your recipe or replace the bacon with cheese.

Älplermagronen is a simple and satisfying dish from the Italian part of the Swiss Alps, made with ingredients that everyone has in their kitchen cabinets. Particularly good food is for farmers in the long winters in the mountains when fresh produce is scarce. In addition, Älplermagronen is a suitable meal for both breakfast and lunch or dinner.

It is prepared by arranging layers of cooked macaroni and potatoes, cheese, which may be Gruyere, Appenzeller or Raclette, pour in cream and sprinkle with caramelized onions. It is baked in the oven and is served with apple sauce and apples may be added. Onions and cubes of bacon can also be included in the recipe. 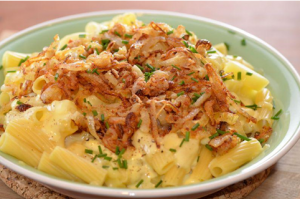 We know that milk, bread and cheese are among the most common foods in the Alps. So it is not surprising that the mountaineers combined them into an easy-to-prepare and enjoyable milk soup.

The main products that are needed are around:

The bread is cut into thin strips 10 cm long and 5 cm wide. The butter is melted in a low heat pan and fry bread pieces lightly until browned.

Put the bread strips in a soup bowl. The milk is heated, sugar and salt are added. The cooked egg yolks are gradually added to the hot plate and the mixture is constantly stirred with a wooden spoon.

When it begins to thicken and stick to the spoon, the milk-egg mixture is poured onto the bread in the soup. Can be crumbled directly into individual bowls. Before serving, sprinkle with grated cheese. 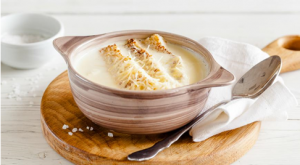 2020-03-24
Previous Post: French cuisine – what we don’t know about it
Next Post: Why is Swiss chocolate different?