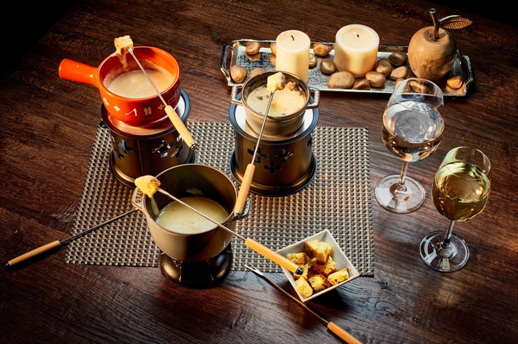 Alpine cuisine is very nutritious, as culinary traditions in Switzerland have been formed under the influence of neighboring countries and the severe climatic conditions in the mountains.

However, despite the well-developed animal husbandry, meat is not mandatory for the home menu. That’s why in Swiss cuisine you can find very tasty dishes that will appeal to vegetarians and vegans. 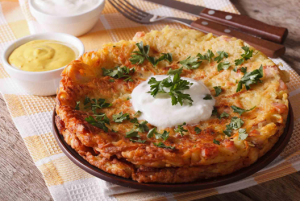 Which Swiss specialties are suitable for vegetarians and vegans?

The Swiss are proud that their national cuisine is not only delicious but also useful. Among the main products they use are vegetables – cabbage, spinach, carrots, as well as legumes and rice.

Potatoes are also a frequent guest in the kitchens. Among the most popular Swiss dishes, for example, are potato chips.

Milk and dairy products are of special respect. It is no coincidence that two iconic Swiss dishes are prepared on the basis of cheese. These are fondue and raclette, and what they have in common is that they are melted cheeses.

Bakery is highly developed in Switzerland. We offer a wide variety of breads made from high quality local flours. Some of the pasta can also be eaten as a snack, as is the case with the famous Zurich bretzel.

Since milk, bread and cheese are among the most common foods in the Alps, it is not surprising that the Swiss have included them in an easy and appetizing milk soup.

The main products for it are fresh milk, egg yolks and dry white bread, to which you must add butter and grated yellow cheese. Melt the butter and lightly fry strips of bread in it, which are placed in a tureen. The warm milk is seasoned with salt and a little sugar and the beaten yolks are gradually added to it.

When it starts to thicken, this mixture is poured on the bread in the tureen or in separate bowls. Finally sprinkle with grated yellow cheese. Simple and delicious, right?

Alpine farm pasta Älplermagronen is another Swiss dish, suitable for vegetarians. It can be eaten for breakfast or for lunch or dinner.

It is very easy to prepare. Layers of cooked pasta, potatoes and cheese are lined, which are covered with cream and sprinkled with caramelized onions. Älplermagronen is baked in the oven and served with apple sauce. 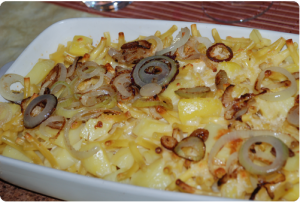 Fondue  (Fondue) is a quality Swiss cheese, slowly melted over low heat. There are two legends about the origin of the mountaineers’ favorite dish.

According to the first, local shepherds took only bread and cheese with them to eat in the mountains. Well, you also brought wine to warm up. Since the cheese was hard, it occurred to an ingenious shepherd to melt it in a pot of fire, adding wine.

The result was a fragrant hot mixture in which the shepherds dipped pieces of their bread. There is another story in which a monk named Vacarinus is involved, and the story is from the 13th century. Once during Lent, Vacarinus decided to circumvent the ban on eating cheese.

The cunning monk heats the solid product until it acquires a liquid consistency and presents it as a cheese soup. The other monks debated for a long time how different this dish was from the forbidden one, but in the end the greed prevailed and allowed it to be eaten during Lent.

These are legends that you can believe or not. It is an indisputable fact that today the national Swiss dish has entered the world culinary treasury.

What is the reason for his fame? To get the perfect fondue, you need a lot of quality cheeses, usually two to five types are used.

There are different combinations, one of the most commonly used includes Emmental and Gruyere. They are melted with the addition of white wine, and for a perfect taste a little aromatic cherry brandy Kirsch is added. Cheeses are also used for fondue Gouda, Friborgioa, Appenzell, Camembert and others. However, getting the right products is not enough.

You must have suitable utensils and cutlery. Fondue is prepared in a special dish – kakelon, which is placed directly on the table.

The forks are also special. They have a round handle and three teeth. With them, everyone around the table melts pieces of bread in the divinely fragrant melted cheeses. And who wants to eat something sweet, can try a version of fondue with chocolate. 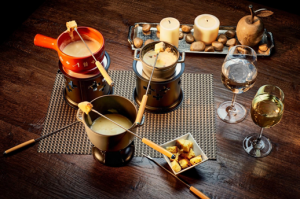 Raclette is also prepared on the table and again with Swiss cheeses. Like the fondue, it gathers people around the table on frosty winter evenings.

The cheese, also called Raclette, is warmed on one side and the melted part is scraped with a spatula directly into the plate in which boiled potatoes and pickled cucumbers were previously placed.

The cheese used is high in fat, which allows it to melt quickly so that its structure becomes creamy. To make it easier, a special appliance, also called a raclette, is now used to make it. It consists of an electric grill and a hot plate. 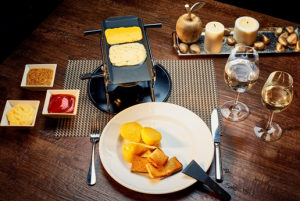 Rösti is a very simple and very tasty potato dish. Three alpine countries claim its authorship – Switzerland, Germany and Austria. However, the Swiss are convinced that the appetizing roasts come from the canton of Bern.

In the three Alpine countries they like the potato dish equally, but there are some differences in its preparation. The first difference is that ryoschi can be made from both boiled and raw potatoes.

Their shape can be oval or round, the size can also be different – as much as the whole pan or as schnitzels. They can also be fried or baked.

Roasts are prepared by first grating raw or boiled potatoes.

Different products can be added to them:

Spices are used, and even apples can be added. The dish looks spectacular when fried egg is placed on top before serving. 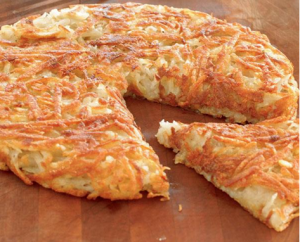 Here is something that can be eaten by vegetarians and vegans at any time. When it comes to Swiss pasta, we can’t help but mention the classic Zurich Bretzel.

It can be prepared with or without stuffing, sprinkled with salt or seeds. Prepare tight dough from flour, a little sugar, butter (for vegans with vegetable fat) salt and yeast.

From the dough is formed a “sausage”, which is cut into 6 pieces of about 40 cm. They are rolled in a specific way to give the characteristic shape of the “pretzels“.

Then boil in water with baking soda for a short time. After cooling, sprinkle with salt or seeds and bake. Swiss bretzels are an excellent breakfast or appetizer for beer. From them you can make a great sandwich by cutting them crosswise, grease with butter and put cheese between the two halves. 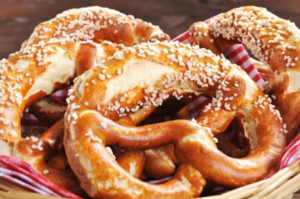