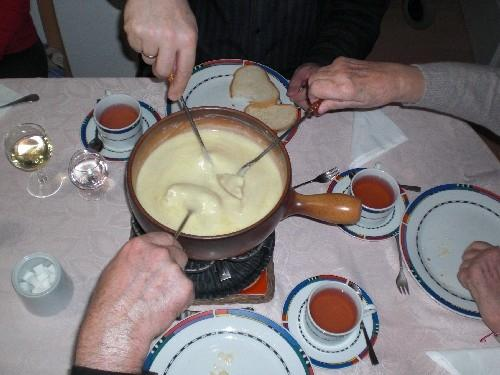 How to serve and consume Fondue

Consumption of Fondue is related to some basic principles that we can’t skip when we are about to organize a feast with this dish at home. In order to make sure that we have heated properly the Swiss cheese for Fondue, first of all we have to buy the right pot for that purpose.

Avoid using a regular saucepan, because its bottom may beunfit for warming up with a flame for a longer period of time. If you use unsuitable saucepan, the cheese may burn and spoil the taste of the whole dish.

Nowadays, there are many types ofFondue sets,ranging from modern with electrical heaters and more traditional ones that are powered with fuel. The traditional fondue set includes a ceramic or metal pot for melting of the mixture, a stand, forks and fuel holder.

In the markets you can find both Chinese fondue sets and original Fondue sets that sometimes are combined in a promotional packagewith original chocolate or with spices such as black pepper and nutmeg.

What is the Fondue burner?

There are some special fuels that you can buy, in the form of gel or liquid, but it is important to make sure that your fondue set is suitable for the fuel that you have chosen. For example, if the cap unwinds and it has an empty chamber, most probably a gel-shim or a gel-like fuel is used. And vice versa – if the lid of the burner doesn’t unwind and you are able to see some felt or cotton in the chamber, then the burner most likely uses liquid fuel.

If your fondue burner functions with liquid fuel, you can use methyl hydrate, also known as methanol or wood alcohol, instead of a special fondue fuel, which usually contains just methanol with added blue paint. The main ingredient can be bough in bulk as a paint diluter from the ironware shops and shops for building materials. This may be the cheaper option.

Keep in mind, however, that the lack of paint may be a problem. Once lit,  the fondue burner often burns with a transparent flame if coloring agents haven’t been added to the methanol. Therefore, you should be very careful if you are preparing a fondue in this way at home, and especially if there are kids present. The chocolate fondue dishesare much more easily heated and relatively safe – with a candle.

And there comes the cherished moment in which we can try the dreamed fondue!

It is advisable to always dip the bread in the middle of the special fondue pot and to rotate it in the form of the infinity sign. This movement, according to the Swiss, portrays the cross of the flag of the country, so it has become the traditional way of consuming fondue. 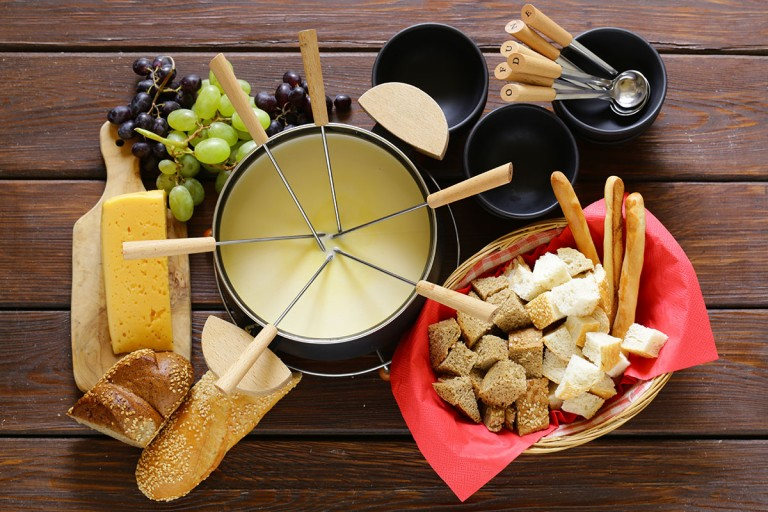 When it comes to serving and consuming fondue, there are several traditions that must be complied with. As we know, this is an extremely social food that we share almost always with close friends and relatives. So it is assumed that if you are a man and your bread falls from the fork into the common pot, then you should buy drinks for everyone present at the table.

If one of the ladies drops her bread into the fondue, then she should give a kiss to each one of the people who are sitting next to her. Another tradition that Swiss respect in convenient situations, for example,is to drink quickly a small amount of brandy of sour cherries (it is called a Kirsch or Kirschwasser) in the middle of a meal.

Typically long and elongated forks are used for fondue in order to dip the bite in the prepared mixture. And while bread and cooked potatoes are the most common foods that we can dip in the pot, in fact, there are a lot of other options.

Mushrooms, pieces of apple, roasted vegetables… Everything that can be forked and dipped in the hot cheese is suitable. But if you are a traditionalist and you prefer to dip only bread in the cheese – which is a simple but also a grandiose idea, it is very important to choose the right bread for the purpose. It has to be as crispy as possible and cut so that every bite contains somecrust. 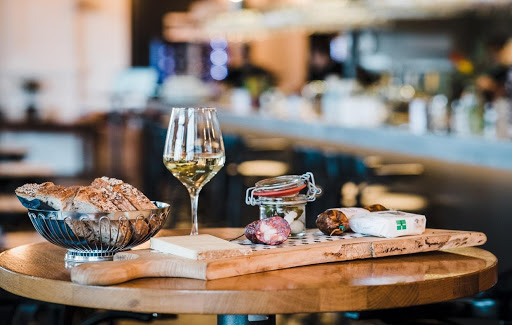 When it comes to the drinks that go perfectly with the consumption of fondue, most often these are the well-cooled dry white wine, for example the Fendant wine, which is specific for the Swiss canton of Valais, or the Blanc de la cote – from the canton of Vaud.Kirschwasser licqueur is also very suitable for fondue.

It is also possible to eat fondue in a combination with hot black or fruit tea, however strange it may appear at first glance. It is very important not to consume cold drinks with the fondue – it is not so damaging for the health, but the Swiss have discovered a long time ago that these cold drinks coagulate with the cheese in the stomach and they may bring us discomfort.

In case you choose to consume alcohol with the fondue, remember that the Swiss tradition requires all guests to make an individual toast before the first sip of the drink. 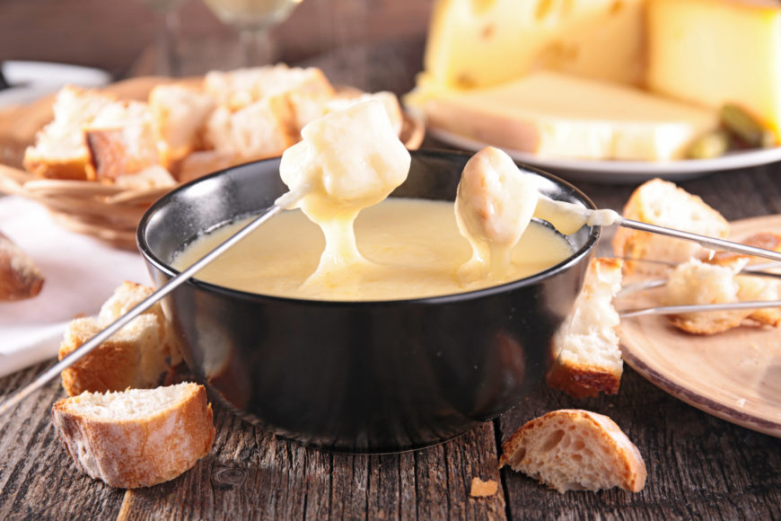 One of the best things about fondue – this is the crust that forms at the bottom of the pot in which we melt the cheese. In fact, it appears only if we have properly set the temperature of the fondue pot.You shouldn’t throw away this crust. On the contrary – with almost no effort and careful slip it can be pulled out and eaten.

Since it is very delicious, the crust is served to the honorary guest at the feast as an expression of gratitude for his presence. If there is no such guest at the table, after consumption of the fondue, the pot may be kept warm and then you can add a few eggs to the crust and prepare an omelet.

Since the fondue is a heavy meal, it is best to combine it with light appetizers as the best option is the fruit dessert. And if you have decided to serve a chocolate fondue, prepare some light foods for the grandiose end of the dinner. In addition, when we eat a chocolate fondue, it is recommended to stir it frequently in order to make sure that it won’t burnby the heat of the candle.

However, keep in mind the unwritten rule that when you invite guests to fondue, you should warn them about that. You might be surprised, but some of the Swiss can’t stand even the smell of cheese, so be prepared and notify them about the main dish. This will give you the opportunity to discuss either a change in the menu or cancellation of the invitation.