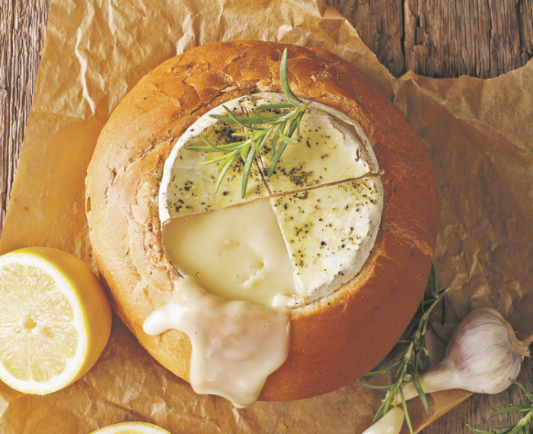 Fondue in bread – what is the secret to cooking

Fondue is the culinary business card of Switzerland and is gaining more and more followers for Alpine cuisine. This simple and at the same time ingenious recipe for melted cheese, prepared directly on the table and consumed with pieces of bread, already has fans all over the world.

Despite its great popularity, there is still something new to learn about it. Fondue with bread is a lesser known, but especially appetizing, variety of the Swiss specialty.

The history of the Swiss Fondue

The fondue originated in Switzerland as a means for farming families to make the most of their limited resources during the severe winter months in the Alps.

In the Alpine countryside, bread was baked only occasionally, so that by the time it reached the table it was often stale. By dipping the bread in melted cheese with wine, it softened and became superb.

According to another version of the same legend, shepherds took with them to eat in the mountains only bread and cheese, which were not always fresh. They also brought wine to keep warm in cold weather. The cheese was firm and it occurred to the ingenious shepherds to melt it in a vessel on fire, and wine was added to season it. The result was a hot aromatic mixture in which the shepherds melted pieces of bread. With this simple dish they ate and warmed at the same time.

From these simple beginnings fondue gradually became a Swiss winter tradition. The first written recipes for it appeared in 18th century cookbooks published in France and Belgium, but they used Gruyère, which is definitely Swiss. cheese, so the Swiss rightly deserve recognition as the creators of the fondue.

His place at the Swiss table was no longer limited to farmhouses, but began to enjoy the interest of increasingly wealthy people. It has become a national dish and a symbol of Swiss national identity. Today it is popular far beyond the borders of its homeland. 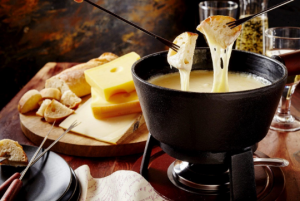 There is no standard recipe, nor is there any mandatory type of cheese for making fondue. Usually two to five types of cheese are combined, which intertwine their flavors and aromas as they melt.

Although cheese, wine and garlic are the main ingredients in the Swiss fondue, you will find recipes with other additives, such as  mountain herbs, paprika, hot red pepper, nutmeg, mustard  and others. The Swiss dish of melted cheeses is prepared directly on the table, so that fondue, in addition to being a food, also has the role of a cohesive social factor.

The fondue is made traditionally and served in a clay or metal container, known as a kakelon. This wide, shallow pot is preferred because it heats evenly and retains heat so that the dish can be consumed for a longer time.

Stuffed on special long forks, pieces of bread are dipped in the bubbling cheese and rotated for a few seconds to absorb the flavors and aromas of the superb dish. Boiled potatoes, pickles and pearls are most often served with the fondue.

However, there is another type of fondue, which does not require a special pot. This is Fondue in Bread and Alpine shepherds are involved again. The shepherds who tended the flocks during the long cold evenings in the winter did not always have a suitable fondue container.

However, nothing could stop the determined and resourceful mountaineers. So they began to eat their favorite dish straight from carved bread, along with pieces of bread. This recipe quickly gained the approval of the Swiss and today it is part of their home menu. 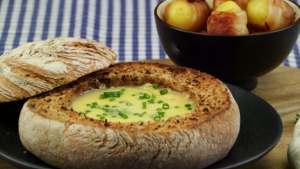 The secret to making fondue in bread

It is known that the Swiss have many types of bread and hold on to its quality no less than that of cheese. In order to make fondue in bread, you have to take a round loaf on which a lid is cut. The inside is carefully cut out and croutons are prepared from it, which will then be melted from the fondue.

What cheese is used is a matter of taste:

In addition to the selection of products, the ratio between them is also important. Approximately 200 g of cheese are needed per serving. For the quantity of wine, the rule “half less wine than cheese” may apply.

Apple juice, beer or other suitable liquid can be used instead of wine. Add natural corn starch, which should be approximately 1 teaspoon per 200 grams of cheese.

Kirsch cherry liqueur is added for flavor, and its amount can vary from a few drops to a full spoon. Instead of cherry liqueur, gin or whiskey can be used, which gives the fondue an unusual, new note.

The cheeses are usually melted in a separate vessel with the addition of white wine. The croutons and the bread itself are baked. Then the melted cheese is poured into the carved bread and served with pieces of bread, pickled vegetables and even meat products. 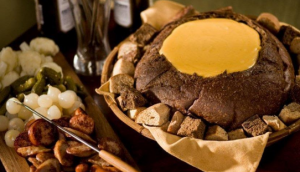 The fondue can also be served in individual portions in carved small loaves. There is another variant, in which cheese is put in a hole in the bread and so it is put in the oven.

Swiss recipe for fondue in bread 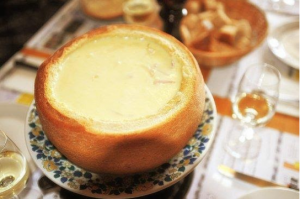 The French alternative to Fondue in bread

The French have their own alternative to Swiss fondue in bread. This is Camembert in bread, which is made from dough shaped into a round shape, in the middle of which a round hole is cut. A small loaf of the famous Camembert cheese is put in it, which is covered at the edges with dough, but so that it does not seal completely. Use a knife to make deep vertical cuts in the cheese, and place a finely chopped clove of garlic on it.

You can also scatter a little cumin. Then bake until the bread is ready and the cheese is melted. 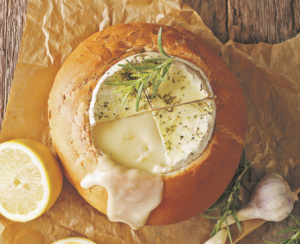 There is another alternative to the delicious Fondue in Bread dish, which is called Pizza Fondue. As the name suggests, it is borrowed from Italian cuisine.

Square or rectangular bread is used to prepare the dish. It is cut so as to obtain a jar in which cheese (usually mozzarella), cherry tomatoes and basil leaves are placed and lightly baked. 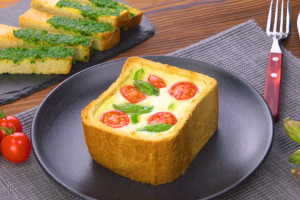