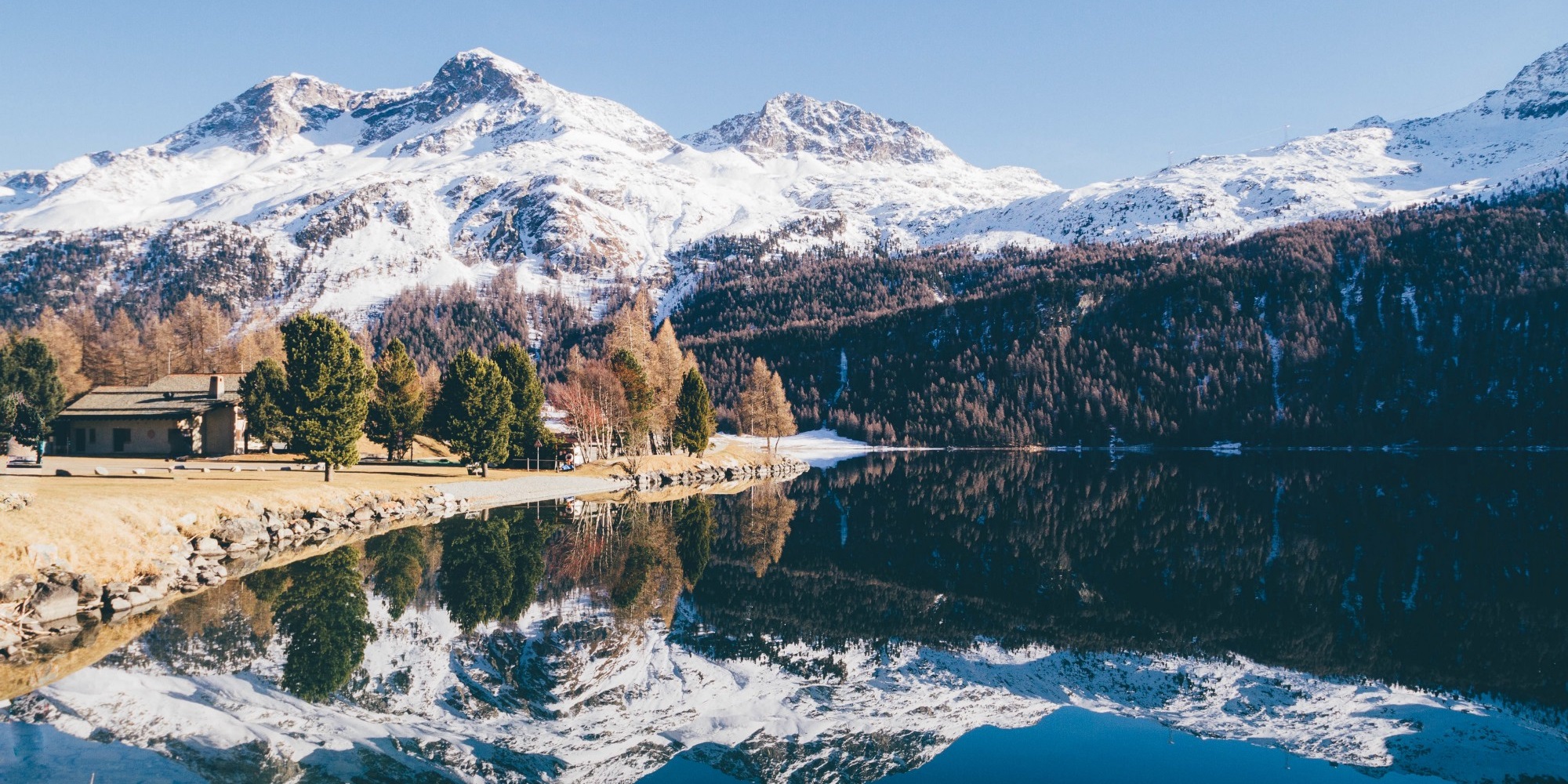 The Most Popular Swiss Dishes

Switzerland is a small country, but it offers products which are so popular and taken up as something normal all over the world that we automatically associate them with the name of the alpine country. Everybody has heard of the Swiss chocolate, cheese, pen-knife, and also about the tempting Fondue.

However, apart from offering excellent conditions for winter tourism, and for doing various sports, it also has what to offer to the gastronomic travellers. The national cuisine of Switzerland is much more than chocolate and cheese. The best way to understand what it is, is to try it, of course.

If you are of those who have never tried Swiss cuisine, you miss a lot. Do try, please, one of the most popular specialities of the Swiss cuisine, to enjoy the true and unique taste of the Alps. One of the conditions to do this is to visit a specialized restaurant offering Swiss dishes, prepared entirely by authentic recipes and with products imported from Switzerland.

The dishes of the Swiss cuisine are characterized by simplicity and high quality of the small number of products used in the recipes.  Many of them are with historical farmer’s roots. There is a predominance of products such as potatoes, onion, cheese, butter, tomatoes, cucumbers, apples — all of them are products which have been available to the Swiss herdsmen high in the mountain.

Here is the list of popular dishes as well, of the beautiful Alpine country:

This traditional Swiss dish is a preferred speciality for during the winter months and has appeared in the region of Zurich. Its name comes from the Swiss-German dialect and literally means Zurich-style chopped meat. 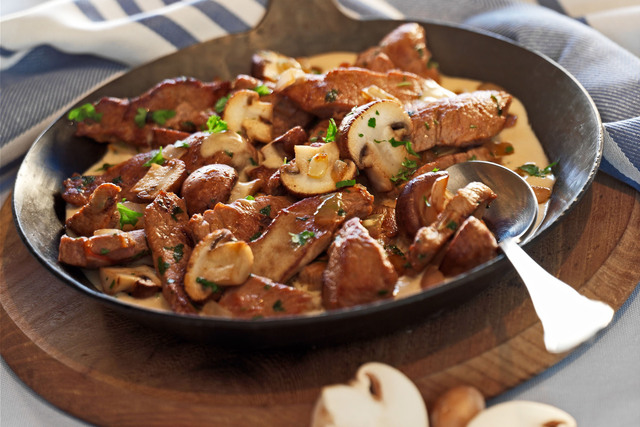 This regional dish is the Alpine version of the American macaroni with cheese. It was conceived by the mountain farmers in Switzerland, who wanted a satiating dish, to be prepared easily with available and inexpensive products, that everyone had in the kitchen. 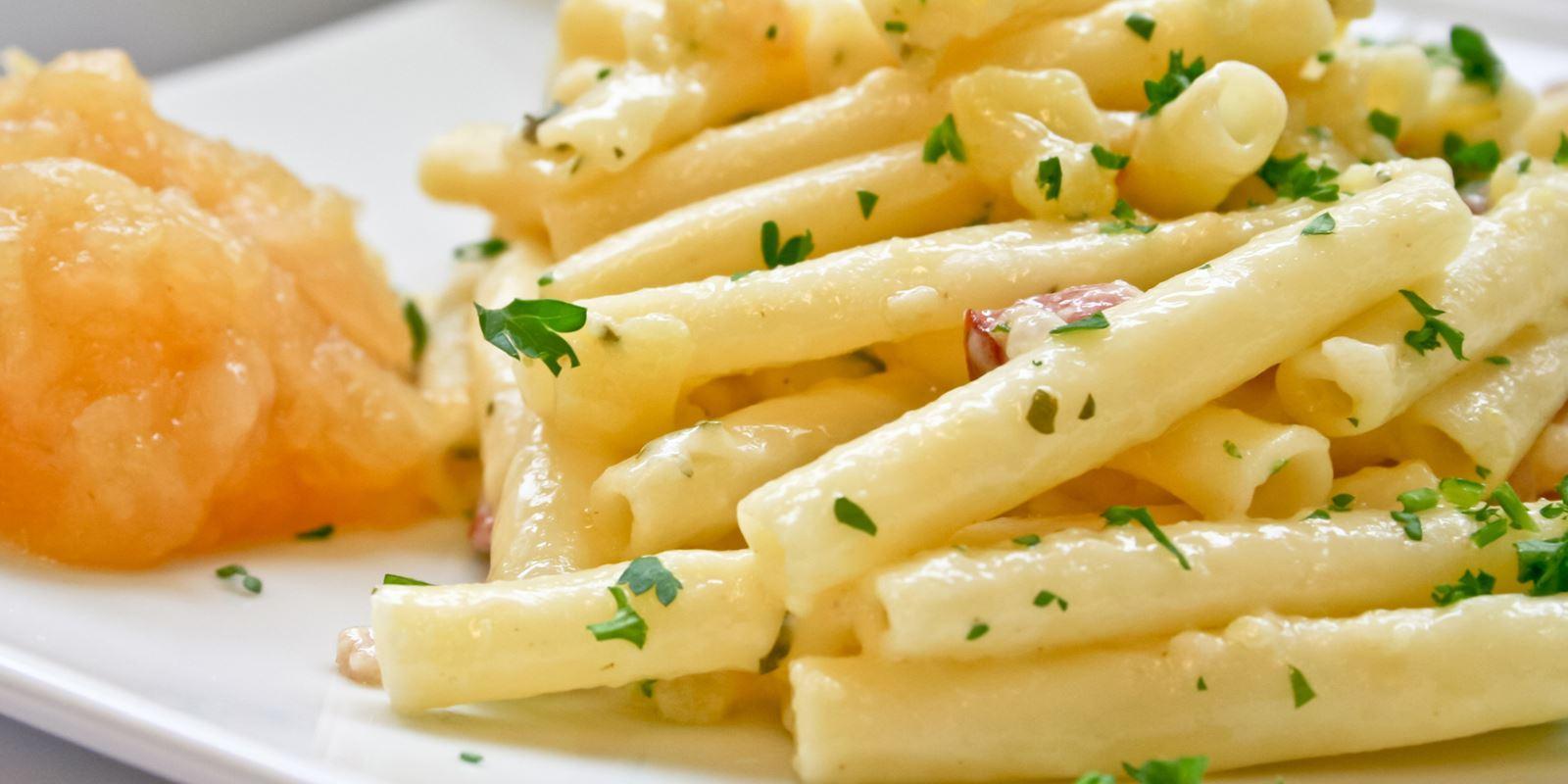 An excellent option for the winter period when the farmers’ food stocks had been finished.  It is prepared extremely easy. Boiled macaroni or penne pasta, potatoes, cheese (Gruyère, Appenzeller or Raclette) are layered, and also cream; they are topped up with caramelized onion and get browned in the oven. It is served with apple sauce and could be sprinkled with cinnamon.

In the recipe, can be added small cubes of bacon or garlic. It is good for breakfast, as well as at any other time of the day.

This traditional Swiss dish comes from the Alpine region of Savoy. The modern version of the tartiflette recipe was inspired by the traditional dish named “Pella” which represents gratin of potatoes and onions in the Provence region in France, which is prepared in a special pan with a long handle. 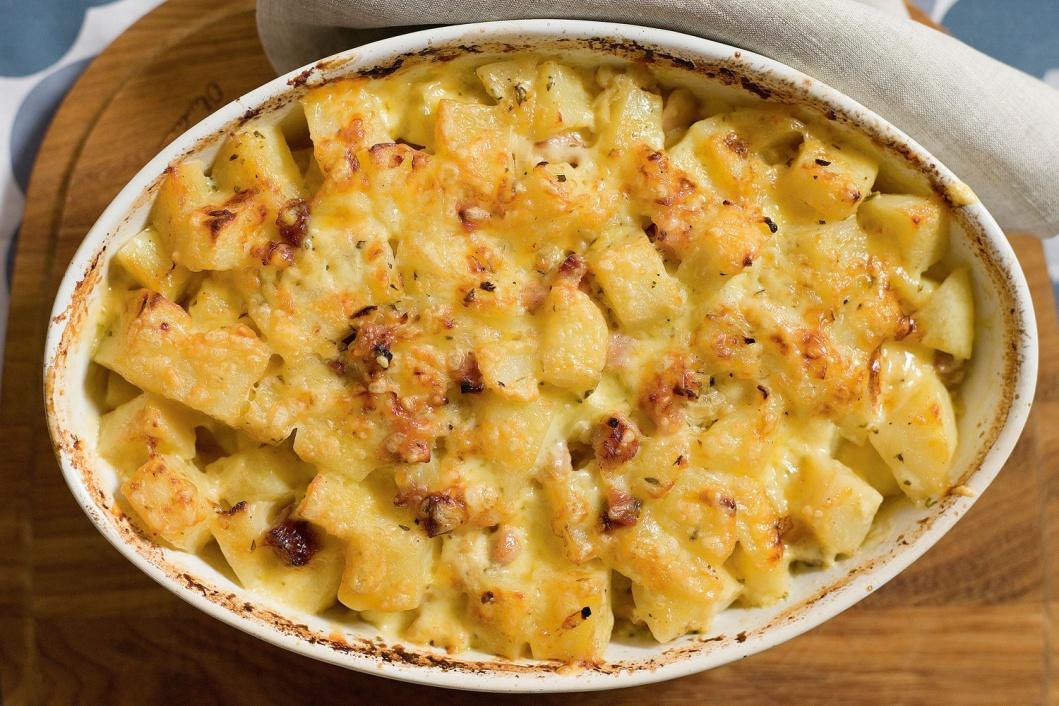 The recipe for the Pella dish was designed in 1980 by a branch union of the producers of Reblochon in order to increase the sales of the cheese.

The potatoes are the main ingredient of Tartiflette. The dish is prepared from potatoes, cheese, reblochon, thin slices of bacon, onion, cream, spices. Its name derives from the word for potato “tartiflâ”. From the Franco-provencal dialect and from the Savoy word “tartifles”.

Tartiflette is prepared by arranging a layer of cut into slices potatoes, onion, cubes of bacon and pieces of butter. The bacon and onion are steamed with white wine to gilding. The arranged layers are poured with cream and spices on the top, and pieces of Reblochon are arranged on them, then, it is baked in the oven. It is served with grilled ham.

If we want to try a truly emblematic for Switzerland traditional dish, we should not miss trying Raclette. The dish Raclette originates in the region of the canton Valais (Valais) in Switzerland. It is prepared by melted medium solid Swiss cheese raclette, which is poured over boiled or baked with the skin potatoes, various vegetables, mushrooms, pickled gherkins, marinated onions and corns, smoked meat or bacon. 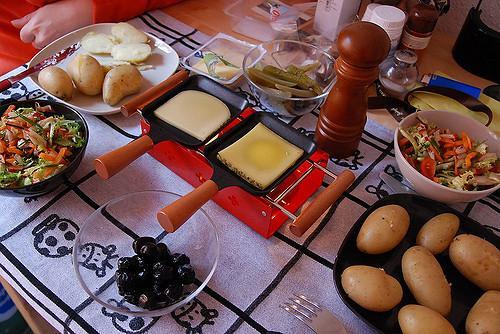 The modern preparation of Raclette is by the electric grill for Raclette, with small pans. The Raclette pieces are put in the pans, which are heated up on the appliance until the cheese is melted.

The consumption of Raclette is a whole social event and can last hours. Raclette is not only an appetizing dish for the cold days; it is also an occasion to gather with our closest ones around the table.

What better way than getting warm during the cold winter days (and to boost our mood) by tasting the aromatic and warm Swiss Fondue in a pleasant company. It is one of the Swiss dishes, prepared with the original cheeses as Emmental, Raclette, Gruyère, Appenzeller, Vashren. This dish is so popular that probably there is almost no man who hasn’t heard of it. 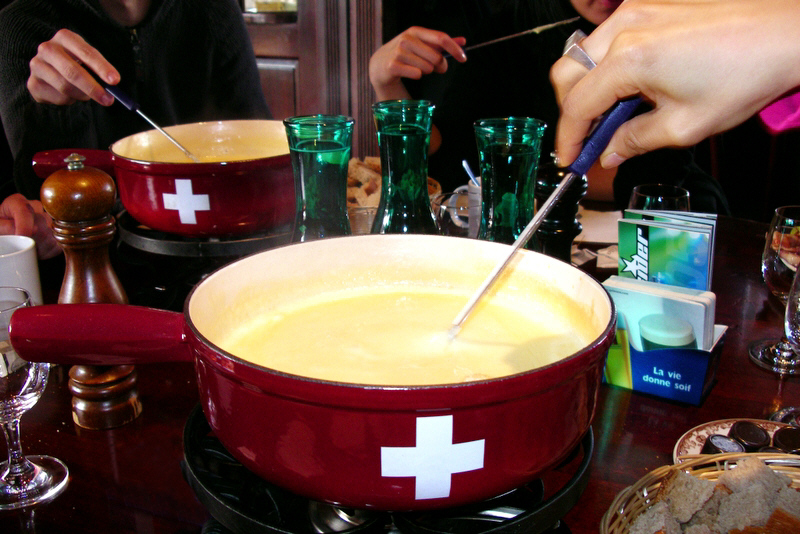 Fondue could be sweet and salty. It can be prepared with milk, black and white chocolate, and also with fat and broth. Fondue is prepared in a ceramic vessel, the chocolate is melted, and different fruits are melted in it (strawberries, bananas, pineapple, kiwi) also sweet temptations like sweets, pastries, biscuits, marshmallow. The recipe for fondue varies, according to which part of the country the region is in: In the Italian, in the French or in the Swiss part.

In the fondue recipe with cheese, there is a combination of different cheeses or only one kind of white wine, traditional cherry brandy Kirsch (Kirschwasser), maize starch, salt, and pepper. Fondue is prepared in a metal pot, heated by a candle or spirit lamp, known as caquelon; different pieces of cheese are placed in it. The pot is rubbed by a garlic clove in advance. The white wine together with the starch are heated up slightly, and then grated cheese is added.

A little cherry brandy is added to the mixture. The mixture is stirred continuously to achieve a uniform consistency, and, so as the cheese not to thicken and stick; the temperature should be kept constant. Different bites are melted in it, such as bread cubes, meat, vegetables, forked on long forks.

Fondue with broth and fat is consumed the same way, but in the caquelon are heated oil and vegetable broth, in which bites of different types of meat, fish, and seafood are dipped.

This is one of the most popular Swiss dishes, which traditionally has been a daily breakfast of the farmers from the region of Bern. It can be found mainly in the German-speaking areas of Switzerland. 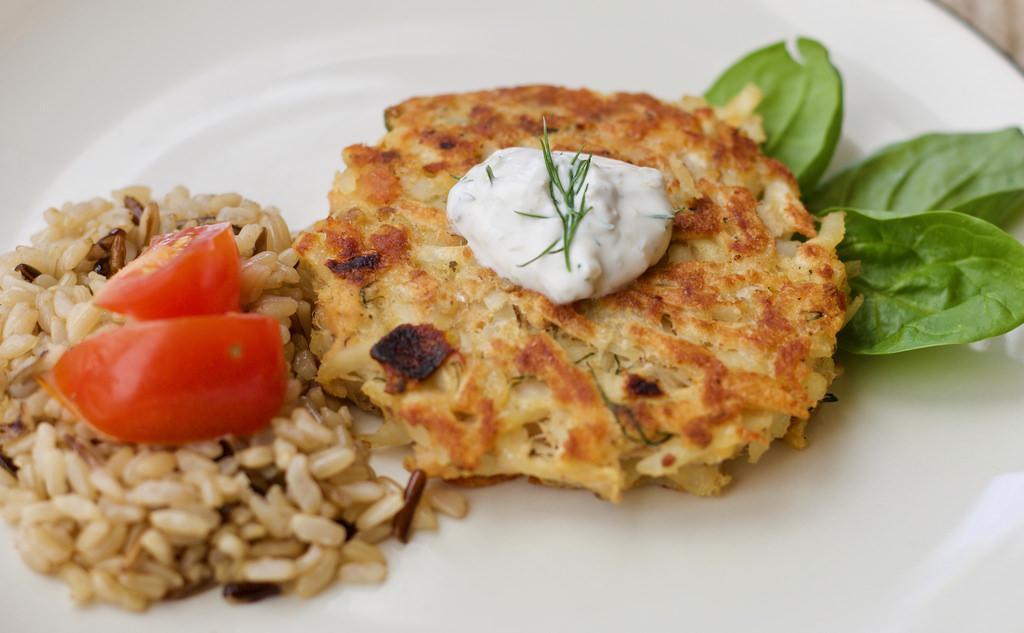 It is made of grated cooked or raw potatoes, salt, and pepper, which are formed in meatballs with a diameter of around 12 cm, and a thickness of 1-2 cm. The röschti are fried in a pan, in oil, butter, or another kind of fat, or baked in the oven.

Usually, the traditional recipe includes only potatoes, but röschti may also contain bacon, cheese, onion, apples and fresh spices. One more indicative culinary example of how one simple dish of a rural region is turned into a global speciality, symbolic for a certain country. Its traditional purpose has been a garnish to other dishes (spinach with fried dishes, cervelat, Bologna sausage).

This delicious alpine dish is fried cheese balls, and it is traditionally served as an appetizer. It is prepared mainly in Western Switzerland, but could also be tasted in the region of Begnins, Luins, Vinzel and around the coast of the Lake Geneva. 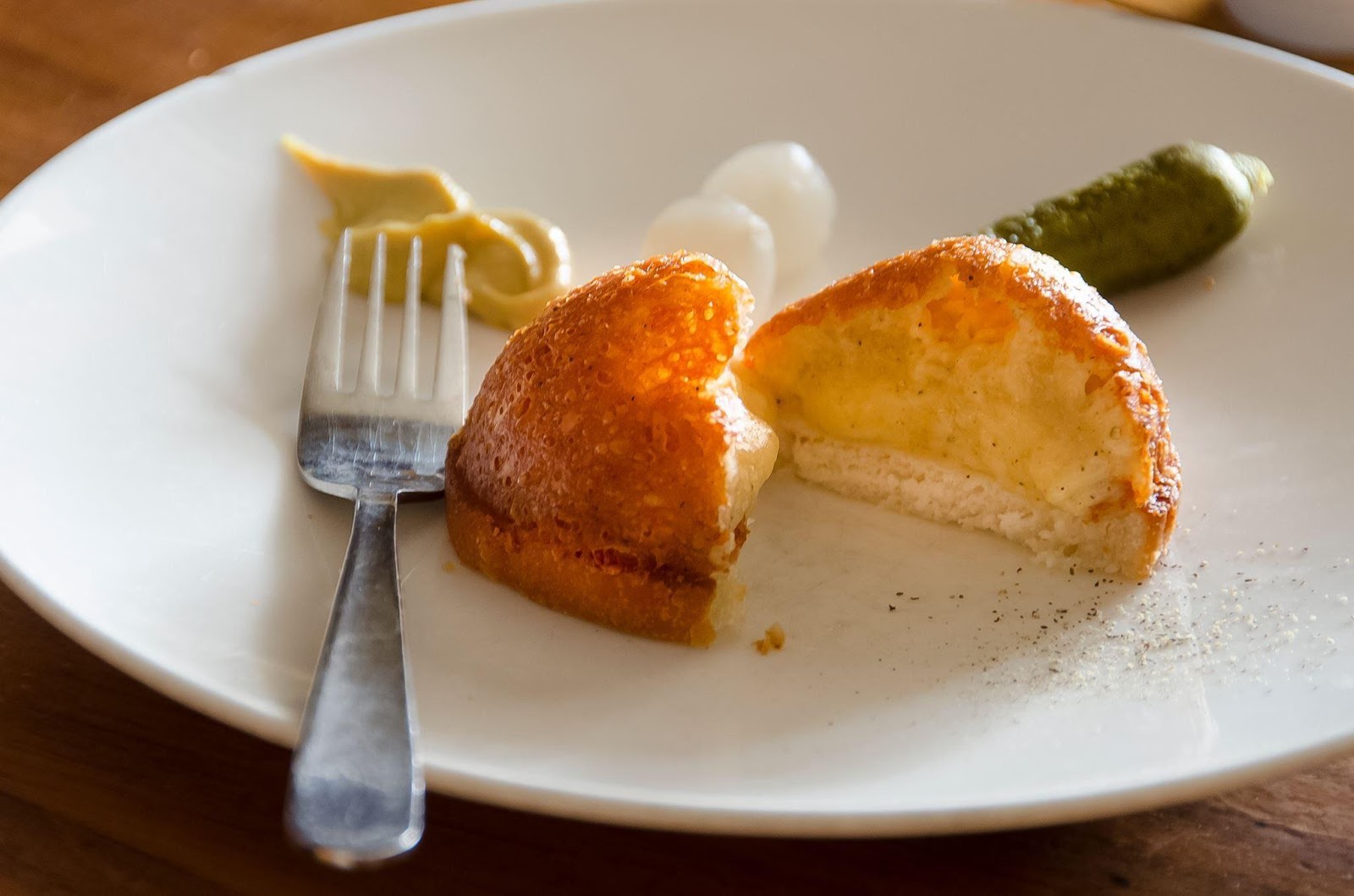 It has taken its name from the battle of Malakoff. Then, the Swiss mercenaries began to prepare Malakoff upon their return from the siege of Sevastopol in the 19th century.

Malakoff is prepared from cheese, flour, garlic, eggs, nutmeg, salt, and pepper. After this mixture is blended, the wine is added slowly, and Kirsch (popular Swiss Cherry Brandy), and meatballs are formed. They are fried until they become golden and crispy.