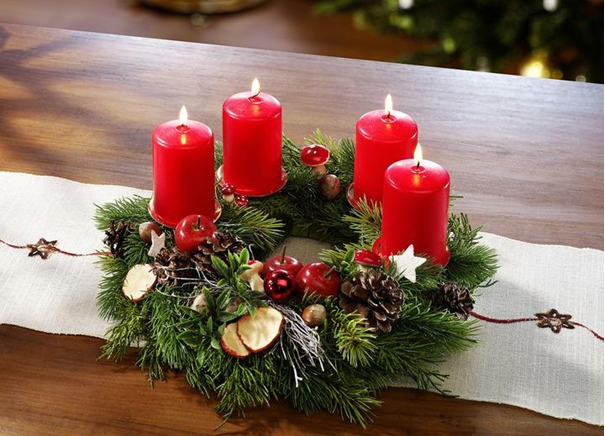 Subtleties in the layout of the alpine table

Christmas is celebrated by all Christians and Catholics around the world on the same day and, of course, the table is packed with appetizing meals, delicious sweets and ritual breads. This is largely true of the Alpine countries, where winter and snow are the most appropriate backdrop for the Christmas holidays.

But the customs and rituals of Christmas go far beyond the culinary element and are the most anticipated moment of the year for the little ones and the big ones. Many of the Christmas traditions in the Alpine countries have a common root.

An interesting point, for example, in the folklore of Austria and Germany, is that Santa has an evil friend called Krampus. This is a creature that looks like the devil and punishes the bad kids for the whites they did during the year.

Krampus is the brainchild of Austro-Bavarian alpine folklore and is hairy, with horns and hooves. His image is used for holiday greeting cards called Krampuskarten. Apart from Austria and Germany, Krampus is also known in northern Italy, Slovenia and other countries in the region.

There are many other similarities in the Christmas traditions in the different countries of the Alps, such as the same holiday feasts and some subtleties in the arrangement of the alpine table. Creating a festive mood begins with the careful selection of exterior and interior decoration. On Christmas Eve, the streets of the alpine cities sparkle with a variety of festive illuminations and landscapes, and the Christmas bazaars attract with warm wine and hot chocolate.

For people in alpine countries, the preparation for the Nativity of Christ begins almost a month before it occurs. This period can easily be called a festive bustle.

Streets and homes are transformed into fairy-tale paintings with the help of multicolored and luminous decorations, and shop windows do not have time to supplement Christmas merchandise. This is also the time of the big Christmas shopping. But more importantly, in the days around this bright holiday for Christians, we need to pay more attention to loved ones and think about the things that really matter in life.

A permanent attribute of the holiday in Austria, Germany and Switzerland is a Christmas wreath with four candles. According to tradition, it is necessary to light one every four weeks before Christmas. This ritual symbolizes the expectation for the coming of Jesus Christ into our world and that light (candles) and life (green pine twigs) that he brings with him.

In addition to conifer wreaths, a sweet wreath can be placed on the table for Christmas, as is tradition in some parts of Italy. It is called the Chicherkia, and behind this name are hidden small fried balls of aromatic dough, plentifully drizzled with honey and wreath-shaped. The dessert is characteristic of the Christmas and New Year season.

Then a little sweet departure to continue with the Christmas attributes. In order to prevent the anticipation of the holiday from being so tiring for the children, residents of Germany, Switzerland and Austria adhere to the so-called Christmas calendar (Adventskalender).

The tradition dates back to the 19th century. It is believed that the first calendar appeared in 1851 in Germany with the care of followers of the Lutheran Church. The first printed Christmas calendar dates from 1902 and is made in the form of a Swiss watch.

Today, the Christmas calendar can be a canvas, a house or a card (it all depends on your imagination) with 24 divisions. Their number corresponds to the number of days left until Christmas – from December 1st to December 24th. At the beginning, only biblical illustrations were placed in each ward, but now gifts – sweets or toys – are added to the windows for children. 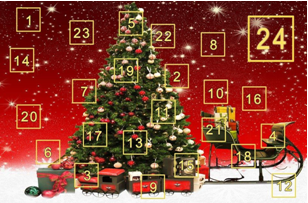 An integral part of the holiday in the Alpine countries is the Christmas tree. It is traditionally decorated by the whole family on the eve of the holiday. It is believed that the custom goes from Germany with the decoration of evergreen branches around the shortest day of the year – December 21st.

It was not until the end of the 16th century that whole evergreen trees began to sprout, symbolizing eternal life. They become one of the most significant moments in the festive ceremony. The Germans gradually began to decorate the tree with toys, candles, colored balls, and many gifts were left under the tree. This Christmas tradition exists today all over the world. 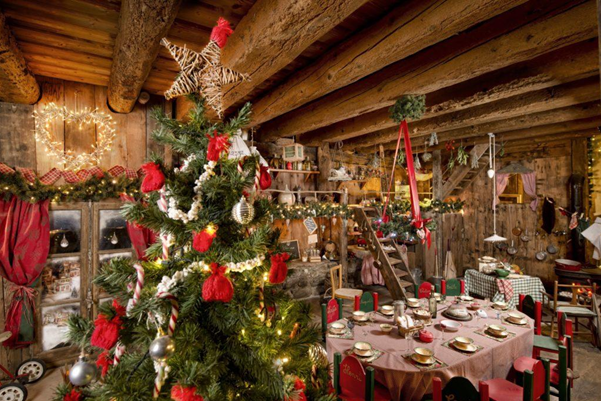 The curious thing is that the Swiss love to use not only traditional Christmas toys and garlands, but also various non-traditional items as holiday decorations. In 2016, for example, St. Gallen residents decided to put on their Christmas tree … sausages. This traditional regional product is very popular with locals and is considered to be the unofficial canton logo.

For Christians, Christmas is an appropriate occasion to bring the whole family together, so they prepare very carefully for the festive table. The alpine house in the alpine homes already has a place of honor in the house, a gala dinner is being prepared, the table is being decorated and gifts are being packed.

The highlight is the Christmas wreath with four candles. The arrangement of the table requires special attention as it is the center of the Christmas gathering. Typical colors for Christmas decoration are green, red and gold. For decoration are used elements of nature – green twigs, red apples and other red fruits, nuts.

Along with them are put red or gold candles, Christmas stars, made of different materials, colored balls. The tablecloth and napkins have the motifs of the holiday. The hosts bring out  their finest dining sets, and champagne is one of the drink glasses. 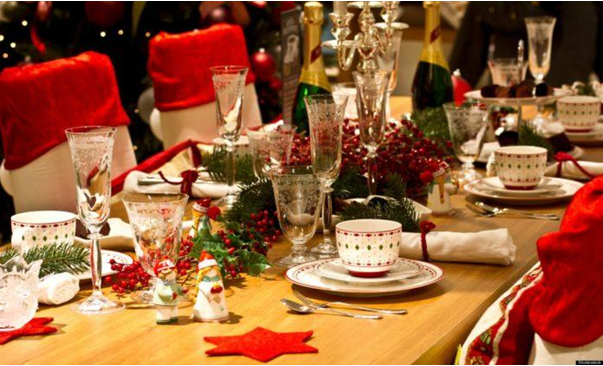 Subtleties in the layout of the alpine table

Very typical of the alpine region is the use as an element of decoration of various homemade Christmas cookies. The cookies, which usually smell of ginger, cinnamon and cardamom, are revered in all countries of the Alps. In addition to being delicious, they fit perfectly into the design of the festive table and can also be given away. 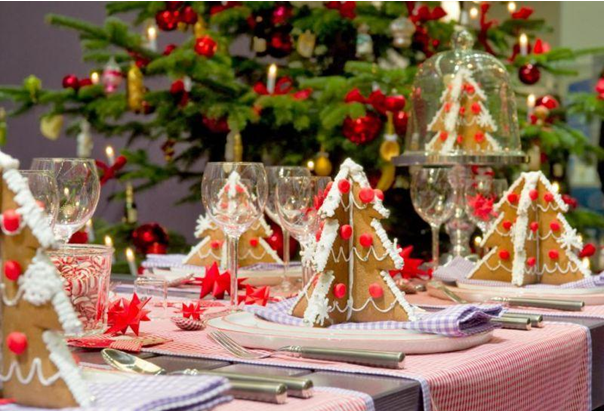 Another traditional for Christmas table dessert is also very appropriate for a festive accent on the table. Born in France, the Chocolate Christmas Stuff has made its way to other regions of the Alps as well as across Europe.

The story of this cake is related to the tradition of the vigil that people used to light at their hearth on winter evenings. Its culinary incarnation is prepared as a roll of pandishpan dough, richly smeared with brown chocolate cream, which looks like a real tree. Decorated with various sweet fondue, marzipan and chocolate figures – sponges, twigs, cottages, sleighs.

Another sweet invention of the region has earned its place at the festive table. We owe the Germans the preparation of the unmodified Christmas carol. In fact, this is not exactly sweet but sweet rite bread that has long crossed the borders of his homeland.

Initially, ordinary bread was made, but over time the recipe has grown enormously. Now the dough is kneaded with lots of butter, and the most important thing about the result is that many and many different dried fruits and flavors are added to it.

Due to the cultural diversity of the Alpine region, the Christmas menu is very diverse. In all countries, however, they emphasize meat, meat products and cheese.

The meals also include potatoes, sauerkraut, mushrooms and other gifts from the mountain. In the center of the table is the host’s Christmas specialty, which may be stuffed duck, goose or turkey, pork fillet in dough, meat with potatoes and sauerkraut or other meat dish. 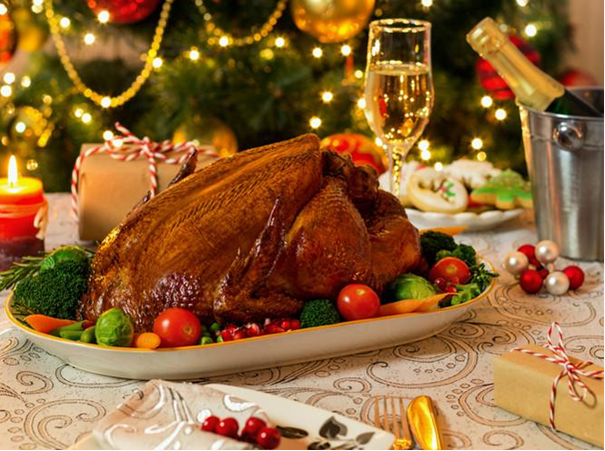 In the German-speaking part of Switzerland, the menu cannot go without the most national local dish – fondue. Probably for this winter holiday, many locals will prefer meat fondue over the more common cheese fondue.

In this case, there will be a special vessel for meat fondue cakelon in the center of the table. In it, a warm batch of meat will bite meat swollen on long forks. Meat can be chicken, pork or beef, and vegetables, sauces and fresh cubes are served.

Whatever the Mountains put on the table for Christmas, they won’t forget to warm up with a glass of aromatic wine.