How Fondue has become a traditional Swiss dish

History of Fondue – the emblem of Switzerland

Regardless of what we say, we cannot deny that the taste of a well-prepared fondue is exactly the traditional taste of the Alps. Although it is a fact that a dish of melted cheese, wine and flour, was mentioned in the epic work of the ancient Greek poet Homer „Iliad“, the Fondue dish is mostly associated with Switzerland. This dish seems to unite in one and exceeds all typical things for the country. But how has it become the emblem of the alpine country?

The original Swiss salty fondue dates back to the Middle Ages when the Swiss found this convenient way to eat outdated cheeses and breads. The name of the dish meant „melted“, from the French word fondre. It was mentioned in the „Cooking book of Anna Margaretha Gessner“, dating back to the XVII century. Moreover, by heating and adding wine, these products once again gained very good, even great gustatory qualities, and they could be consumed with pleasure.

This was great, considering how many families at that time had problems with the supply of fresh food. In addition, the fondue with Swiss cheeses is very satiating, so the consumption of many other foods was not required.

At the beginning of the XVIII century the fondue recipe had gained the highest popularity among the mountainous population of the Fribourg region. That‘s why the most popular fondue nowadays is the so called „moitie-moitie“ (literally translated from French – „50 50“). It is prepared of equal parts of the local unique cheeses Gruyere and Vacherin, or Gruyere and Emmental.

Garlic is one of the most common spices used to flavor Fondue. The fondue cuisine had even greater progress in the early XX century, when corn flour was added to the recipe.

The cheeses become hard very quickly once they are removed from the hot-plate, but the Swiss have figured out how to deal with this problem – by keeping the dish on a constant ,slow fire in a pot, which is usually a ceramic one. Typically, people gathered around it and dipped bread in the divine delicious sauce, using special long forks. Nowadays the forks have plastic or wooden handles, so they can protect the person from burning.

Fondue sets are extremely affordable and there is no Swiss family that does not own at least one. Their mass production began and international sale in the XX century, and many people around the world were able to get the full set for the dish. Nowadays these sets are available even in the supermarkets in our country and their prices start from 20 leva, although there are also more luxurious fondue sets.

In its classic version, the fondue recipe includes mainly cheeses, although there are many variations. That is why there are some sceptics who claim that the fondue recipe was artificially imposed as a national dish of Switzerland in the 1930s. According to them, this local dish was a non-significant impact factor, but this was seen by the trade Swiss Cheese Union (SCU) as a chance to stimulate the Swiss to consume more cheeses – since at that time it was the time of the Great Depression in the USA, which had affected the entire world economy.

It can not be denied that with its campaigns SCU has helped to establish the fondue as a traditional recipe of the country, as well as the fact that the organization was terminated at the end of the last century because of the suspicion that it actually constituted a cartel unit that suppressed the market.

At the same time, however, we can not claim that the dish has become so popular only because of the support of the organization. It is not by accident SCU has chosen the fondue to promote its production – it simply includes all favorite things of the country in one!

Despite all speculations, the Swiss people accept fondue very warmly to the present day, perhaps because it brings together some of its favorite things – wine, liqueur, cheeses and many other products depending on the type. The dish preserved its popularity and continued to attract more fans after the World War II, in which Switzerland remained neutral and accepted refugees seeking salvation from Nazi troops.

In all these troubled times, the fondue remained a symbol of the unity of the country, precisely because it is a food that brings all people together, gathered around the pot with boiling temptations. The biggest advancement of fondue, from a marketing point of view, was in the 1970s and 1980s.

Apart from the historical aspect, fondue has also become popular in Switzerland as the ideal food for consumption during the winter season, which is loved by both local people and tourists who are fans of winter sports. There is nothing more enjoyable an emblematic about the Swiss Alps than eating a warm fondue at the foot of a mountain peak or after a long day of ski slope and strong sensations.

The tradition has passed the Swiss borders – fondue has become an integral part of the experience in one of the biggest and most popular winter resorts in the world and in the USA. 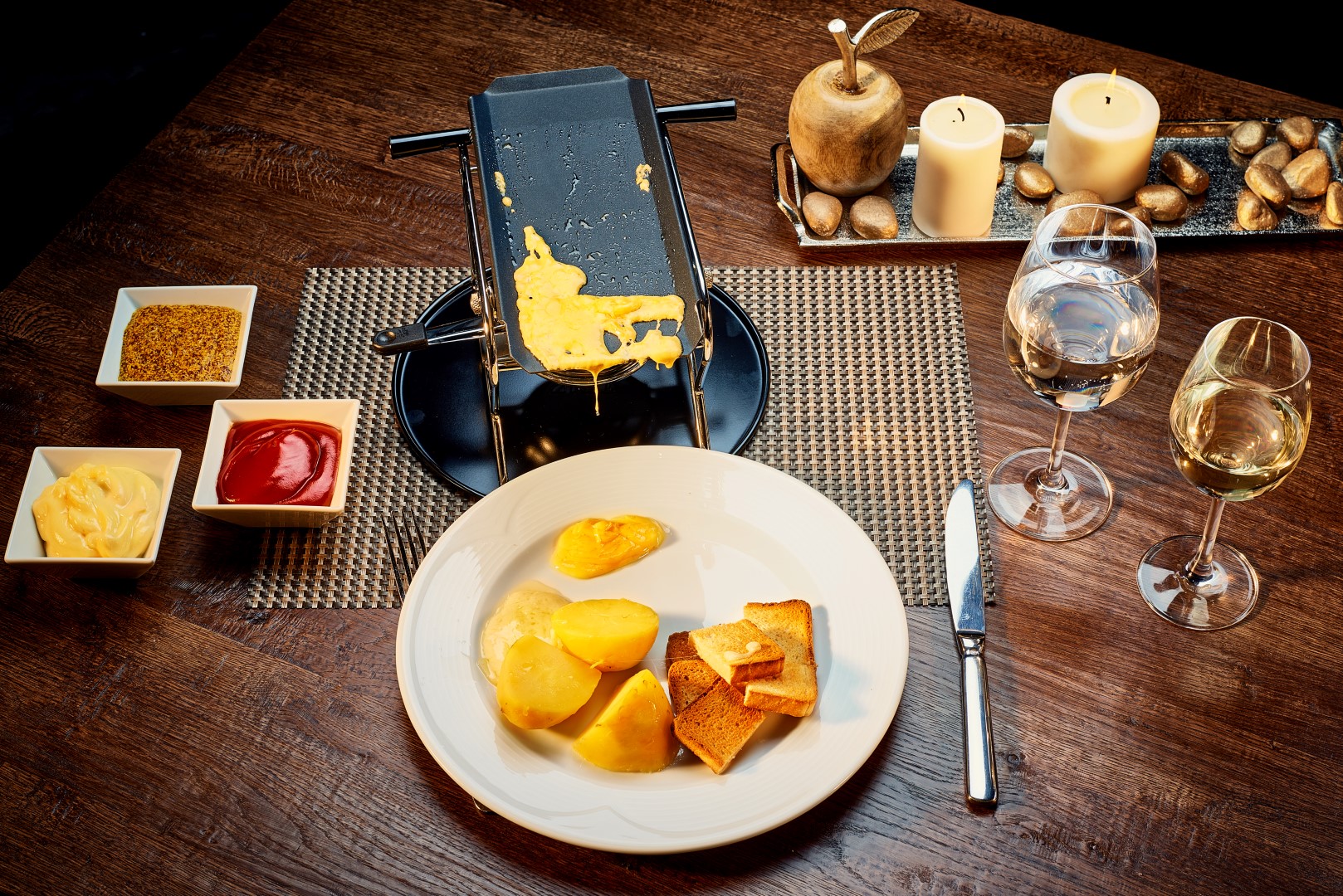 Nowadays Fondue has many varieties

The dish can be a classic fondue with cheeses, wine and spices with bread bites or vegetables, or raclette with eggs. It can also be oily fondue with delicious meat pieces (the so-called Fondue bourguignon). It can be Chinese fondue in broth, a unique blend between the traditional cuisines of two nations that are so different. And finally, it can be the tempting chocolate fondue with a variety of pretzels, candies, ladyfingers, and so on.

Regardless of the specific variation, the fondue always and everywhere in the world brings  the specific spirit of the national cuisine of Switzerland. We should not forget to mention how easy and quick to prepare is the Fondue dinner. Everyone could prepare the cheeses, spices and the other ingredients for the melt, just by sticking to some basic principles as tradition requires. Which does not mean that you can not shine as the host of such an event!

Fondue – culture, invitation to a party and lifestyle

Swiss fondue really amazes us with its simplicity, but it’s more than just food – it is a culture, invitation to a party and lifestyle at the same time. Its consumption is associated with some very distinctive local rituals that enhance the sense of belonging and the touch to Swiss culture as a truly unforgettable experience.

The best thing is that these traditions are not just a fabrication for the tourists. On the contrary – they are indeed respected by local people in the country, also in their everyday life, not only on holidays. Traditionally, the fondue gatherings are accompanied by alcohol consumption and friendly conversations. But since it is always consumed in company and directly from the common pot, for example, it is a tradition if your bite drops in the common pot, you have to bear a symbolic „punishment.“

Most often, gentlemen have to buy drinks to the entire company, while the ladies “pay” their „fault“ by kissing a man who is sitting close to her. All this happens as a joke and brings more joy to the evenings dedicated to fondue.

The Swiss people have a tradition also with regard to the drinks suitable for Fondue – and it is a strict one: the drink should not be water or…..red wine! Only white wine should be consumed, but if you don’t like alcohol, then you can choose tea because that is the tradition. The dessert is accepted to be as light as possible, for example, fruits, because the fondue itself – whether made of cheese or meat, is quite a heavy food.