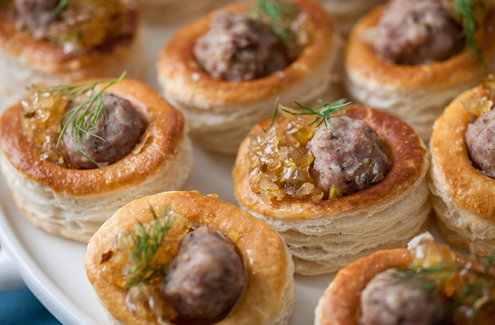 Alpine meat pie, known as Pastetli, is a traditional Swiss dish, suitable for both daily home-cooked lunch and for welcoming guests, because it always looks aesthetically pleasing. Pie in a very successful way combines two of the favorite products of people in the raw mountains – meat and bread. According to some Swiss culinary experts, nowadays pie is gradually undeservedly replaced by more modern cuisine. Although considered retro by some households, this specialty has a unique taste and is revered by most of the local population. Therefore, meat pie is considered a traditional alpine dish and tourists in the Alps will miss a lot if they do not try Pastetli. 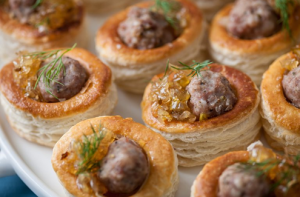 According to the original meaning of the word pie, behind it lies a kind of pastry stuffed with meat, fish, vegetables, cheese, creams, fruits, chocolate, nuts or other salty or sweet products. Typical pies, for example, are Russian pie and Mexican empanadas. These are pies with two crusts and the filling is closed on all sides in a dough shell. The English version of meat pie is also known. Different from these pies is their alpine cousin, which is distinguished by its neat baskets of puff pastry mainly stuffed with meat. 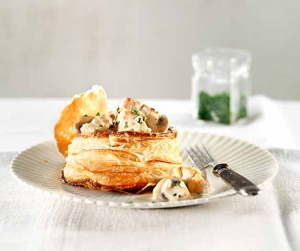 Alpine cuisine traditionally follows the culinary traditions of several countries – France, Switzerland, Germany, Austria and Italy. It is defined as ordinary in the good sense of the word, because it combines a small number, but quality and satisfying products. This is a consequence of the harsh nature in the mountains and the geographical features of the area, which in the past was inhabited mainly by farmers at long distances. That is why the mountaineers during the long winter relied in their kitchen mainly on durable products produced by them, such as meat, milk and cheese, potatoes, pasta.

Many of the dishes of the different Alpine peoples are similar, and the recipes easily cross borders and sometimes the roots of one dish are disputed by the inhabitants of several countries. In fact, the pie, which is highly revered in the Alps, first appeared in France. There it is called vol-au-vent (translated to mean a gust of wind), describing its light appearance and taste. This culinary work has a long history and was first mentioned in Francois Marin’s 1739 cookbook. While in French cuisine it is served as an appetizer, in Switzerland, for example, it becomes a main dish and the composition of the fillings becomes more diverse.

Method of preparation and types of alpine pie

Alpine pie is a basket made of puff pastry, which is first baked and then a separately prepared filling is placed in it. 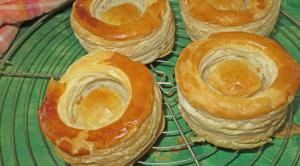 The fillings can range from typical Swiss sausages to salmon. Pastetli with meat and mushrooms, chicken and bacon or minced meat balls are often prepared. Among the usual products, without which this dish will not be the same, are onions, leeks or chives, and as spices are used black pepper, parsley and others of choice. To make the filling more juicy, a sauce is prepared, which is usually made of butter, flour and cream, white wine and meat broth can be added.

Alpine pie is served with a side dish of your choice: mashed potatoes, potatoes, rice, peas, mushrooms, stewed vegetables or a combination of several ingredients. A more refined garnish can be prepared by stewing asparagus with butter. The dish is served warm, immediately after its preparation, so that the basket is crispy and the filling spreads its appetizing aromas.

Traditionally, pie baskets are round in shape, but can also be shaped like a star if served at the Christmas table or other festive occasion. Another thematic option is a fish-shaped pie stuffed with seafood. If the dish is intended for a romantic dinner for two, it is best to look like a heart. 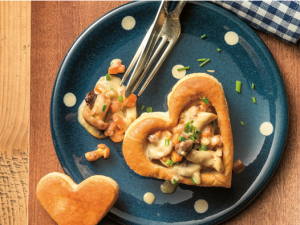 The individual cantons in Switzerland have different preferences and contribute to the classic recipe. In addition to the meat version, there are also vegetarian ones, such as with mushrooms and sauce or with rice and peas. In some recipes, the filling contains traditional cheeses for the region.

Pie is usually prepared as a main dish, but can also be formed as bites, suitable for catering or gathering with friends over a glass of beer or wine. 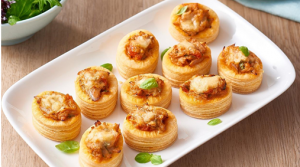 So far it has been the traditional alpine pie called Pastetli. In Switzerland, however, you can come across another interesting-looking and delicious meat pie. Lozärner Chügelipastete is a very popular dish in Lucerne. Apart from being delicious, it is quite attractive with its shape of a hemisphere of crispy crust, on which there are embossed decorations. The specialty is prepared from dough, in which a stuffing of meat, mushrooms, raisins, spices, etc. is put. 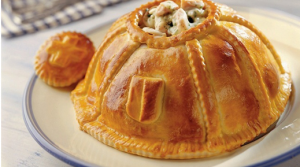 Let the oven preheat to 160-180 degrees, and in the meantime we start by melting the butter in a suitable pan. Add finely chopped onion and stir until soft. Then it’s time for the already sliced ​​mushrooms to enter the pan, wait until they are ready and add the flour. Fry for about 2 minutes, stirring constantly. Add the white wine and about 300 ml. water / optionally beef broth / and leave for about 5-10 minutes, again not forgetting to stir.

Finally add the cooking cream and pre-chopped sausages / you can also use ready-made, but definitely the taste with freshly baked or fried by you will be more authentic /. Season with salt and ground black pepper.

From the puff pastry we prepare 4 baskets with a diameter of 12-15 centimeters and bake for about 10 minutes in the already preheated oven. After cooling for 2-3 minutes, transfer them to a plate, filling them with the pre-prepared sauce with sausages and, if desired, sprinkle with fresh parsley.

The combination of mashed potatoes and stewed peas is extremely suitable for garnish, and if you wish you can experiment and replace peas with stewed asparagus with butter and garlic.

Pie with chicken, bacon and mushrooms

Fry finely chopped onions in oil or butter until transparent, then add sliced ​​leeks and salt to taste. Cut the mushrooms into slices, add them to the already fried onions, wait until the mushrooms soften and remove the pan from the heat.

Cut the chicken into cubes and fry in a separate pan. Sprinkle with salt, ground black pepper and flour, mix well and add it to the onion mixture, also adding the chopped bacon and cream. Stir the mixture well all the time. When the filling thickens, remove from the heat and wait for the baskets to bake.

From the puff pastry we prepare 4 baskets with a diameter of 12-15 centimeters and bake for 10 minutes in an already preheated oven.

After cooling for 2-3 minutes, put them on a plate, filling them with pre-prepared chicken with bacon and mushrooms and sprinkle with fresh parsley if desired.

A suitable garnish for pie with chicken and mushrooms is rice in combination with stewed vegetables. 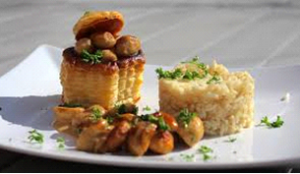