France is an unusual country and it is famous for its delicious soups, aromatic cheeses and masterfully prepared desserts. There is no other country in the world that is so marked by its desserts as France. The French desserts are globally well-known and they are characterized by superior culinary mastery. Being able to prepare French desserts is just an honor.

Almost all of us have heard of the famous queen of France Marie Antoinette, who is famous for her notorious phrase „If they have no bread, let them eat cake.” There is no solid evidence of whether she really said these words, but the phrase stays on the pages of the French history and became a symbol of the social inequality in French society during the XVIII century, caused by the extravagant lifestyle of the aristocratic class.

Regardless of whether the allegations about the queen are true or not, the French cuisine gives us a unique variety of desserts that every connoisseur of the pastry culinary art has to try.

In French cuisine, the use of butter predominates, and this also applies for desserts. The French desserts are characterized by elegance and light consistency.

What is the sweet side of the French cuisine?

We will introduce you to some classic French desserts that have become symbolic for the French cuisine.

One dessert that is symbolic for France with a sponge cake consistency. The dessert comes from the French region of Lotharingia in the north-east part of the country. 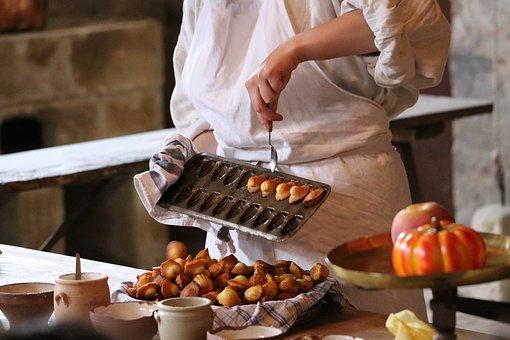 Its preparation is not at all difficult. We just need a special pan for the making of madeleine that contains concaves similar to the form of shells. White flour, eggs, vanilla sugar, butter, salt.

Some classic versions of the recipe include the use of lemon peel and lemon juice, as well finely crushed nuts (most commonly almonds). The appearance resembles to small shells. There are allegations that in the past the people used real shells in which they have put the mixture for the madeleine.

This world-famous French dessert is another evidence that often the mistakes of the master chefs give birth to masterpieces (potato chips, chocolate chips and cornflakes), which in time became a symbolic dishes for a given country.

The dessert originates from the 80s of the XVIII century. The two sisters, Stepnaie and Carloine owned a hotel. One night one of the sisters was cooking an apple pie. However, she was very tired and without wanting she had left the hotplate turned on for a longer period of time. Thus the apples got caramelized.

She decided to save the dessert by covering it with multi-leaf pastry and baked it in the oven. The result was a great dessert that was popularized throughout the world. After the guests have tried the dessert in the hotel they were charmed by it.

The dessert is made of apples, sugar, apple liqueur, vanilla puff pastry. It can be prepared also with other fruits such as pears, plums and quinces. It is served with a ball of ice cream.

This is a dessert that makes every Frenchman proud of the culinary mastery of the country. There is hardly anyone who hasn’t heard of this dessert. In literal translation the name of creme brulee means “burnt cream”. 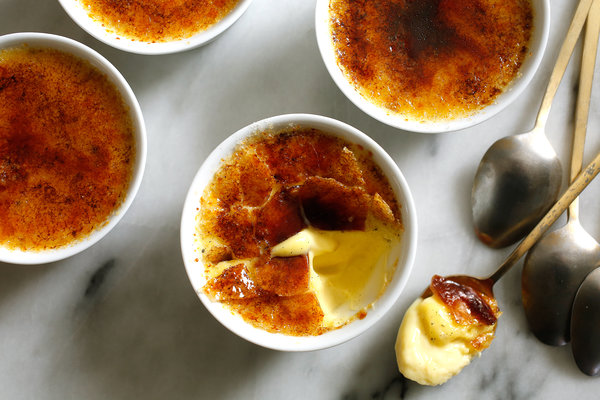 There is another dessert, similar to crème brulee that comes from Spain and originates from XVIII century. It is called  „crema catalana“, „Catalan cream“. The first recipe for crème brulee appeared on the pages of the cookbook of Francois Massiello in 1691.

The dessert is prepared from egg cream and covered with sugar. It is caramelized with the help of a gas burner or an oven grill. The egg cream is made from eggs, sugar, cream, fresh milk. In the preparation of the dessert can be used also brown sugar.

The process of caramelization forms a fine crust of light bronze color on the dessert giving it an irresistible aroma. According to the original recipe to the crème brulee should be added vanilla flavor, but there are other variations. Creme brulee can be prepared with fruits, curds, mint, chocolate, whiskey, liqueur and other products.

The macaroni will charm you with their mild taste and melting in the mouth crispy structure. This divine dessert is made from egg whites, crystal sugar, granulated sugar, powdered sugar and almond flour.

They are a sweet sandwich type of dessert. Two biscuits are stuck together with ganache or with other cream. The filling is made of white chocolate, liquid cream, coloring cooking paint for the cream. The name of this incredible biscuits comes from the Italian word “macarone, maccarone or maccherone” for the kiss dessert. Their roots date back to the Middle Ages, as their glory revived in XIX century.

This dessert is present on the Christmas French table and comes from Bordeaux region. Thanks to this skillful pastry chef we can enjoy this great dessert for 300 years. It has mild creamy filling and hard caramelized shell with taste of vanilla, rum or cognac. 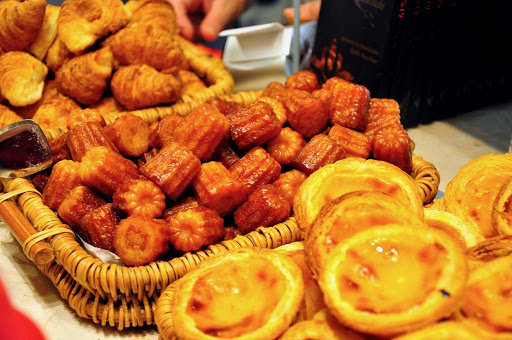 The ingredients are flour, fresh milk, sugar, 2 egg yolks and egg whites, cow butter, vanilla extract. The dessert looks like a small lined cylinder with height of 5 cm and on top of it there is a hole just like of a cake.

Despite the alcoholic flavor, Canele is consumed for breakfast, and even for lunch and dinner. It is equally delicious with a cup of tea and with a glass of wine. In France you can buy Canele in a special gift boxes.

The well-known mousse that is sold in plastic cups with tin-foil caps, can‘t be compared with the original French dessert. Its name is translated as “chocolate foam”.

This French temptation is made from bitter chocolate, egg yolks and egg whites, cream, sugar hot water. The dessert can be prepared with vanilla. It is garnished with whipped cream. 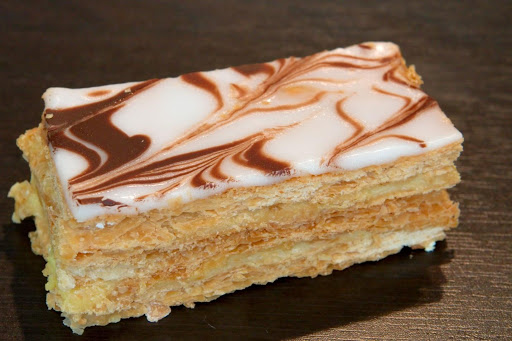 Unfortunately, the real origin of the dessert is not known. It has many versions around the world, and there are even salty versions of the delicious dessert. In many countries there is specific version of this cake with a cream.

According to the original recipe the dessert is made of three layers of puff pastry, and between them there is a pastry cream which in some cases can be replaced with cream or marmalade. The upper and last layer is sprinkled with powdered sugar, crushed nuts or cocoa. The description of the recipe appeared for the first time thanks to the Frenchman Pierre de la Varenne. Years later Marie-Antoine Careme created a new improved recipe.