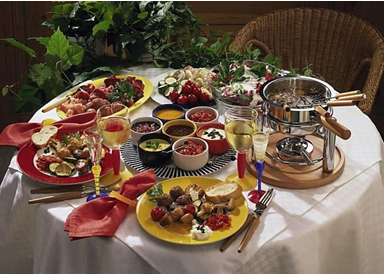 How do we know at home that it is a holiday? It smells appetizing and the table is full of delicious things in large plates. Although the peoples have different customs and rituals, the rich table is common among the holiday traditions in most countries.

The Alpine countries are no exception to this rule, on the contrary. In Switzerland, Austria, Germany, Italy and France they definitely stick to good food, and when there is an occasion all the close people gather around the table and enjoy the festive alpine dishes. 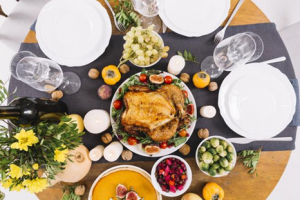 What is traditionally served on holidays?

The culinary holiday traditions of the Alpine peoples are intertwined and the food has some common characteristics. The harsh climate in the mountains is the reason to prepare more nutritious and heavy and at the same time very tasty food.

Among the most used products are meat and a variety of cheeses. In most of the Alpine countries, stuffed duck or goose is one of the highlights of the holiday menu. In Germany and Austria you can’t do without the extremely tasty and varied sausages, even on the holiday.

However, each country has its own specific holiday dishes. The Swiss, especially in German-speaking areas, will never give up their crowning dish – fondue.

The special metal cakelon dish for the preparation of the national dish will surely find its place on the festive table. In it you can prepare a classic fondue of melted cheeses, in which the people around the table can melt pieces of bread together.

For the holiday, however, the menu can be varied with another option – with meat, such as the recipe for Fleisch und Gemüse Fondue. Heat vegetable oil in the cachelon and dip pieces of meat and minced meat balls, as well as vegetables stuffed with long forks.

Of the meats, tender beef, pork and chicken are preferred. No one is indifferent when the bites of meat squeak and spread tempting aromas. Served with small cubes of white and rye bread and sauces.

Some may prefer another meat fondue – Wurst fondue with sausages. 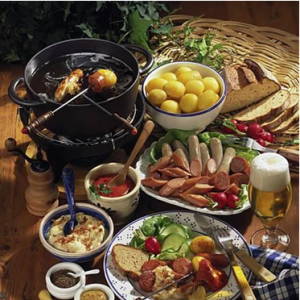 In the spirit of the Swiss culinary tradition, the constant raclette or roaring can be served for the holiday as well.

In the French-speaking part of the Confederation, the festive table also includes meat – a popular example is pork fillet in batter.

Residents of the alpine regions of Italy and the Italian-speaking canton of Switzerland  – Ticino, will probably prepare for the holiday ravioli with various fillings.

They are a type of pasta, but quite different from spaghetti. They are a thinly rolled dough in which various fillings are put – minced meat, cheese, mushrooms, spinach, fruits, etc. They are then boiled and served with various sauces and grated hard cheese. They can be served as a main course or dessert. 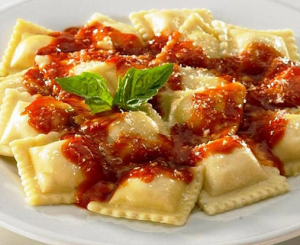 In Germany  for some holidays they prepare  roast duck or goose,  but the table can not remain without the favorites of all sausages in their various variations. The garnish can be made of spicy potatoes with mustard.

And here is a typical dish from the Austrian Alps, which is suitable for both weekdays and holidays. Tiroler Gröstl  is a delicious, nutritious and at the same time very easy to prepare dish. The dish is typical of the ski resort Tyrol.

The rich dish is actually french fries with pieces of pork or beef with lots of butter and onions. For taste and an even more appetizing look, it is served with fried eggs on top.

Another meat dish can find a place on the Austrian holiday table. Tafelspitz is a classic dish composed of beef cooked in a broth of vegetables and spices. The meat is then served with potatoes or vegetables, apple puree with horseradish or sour cream with onions. The recipe is of rural origin, but today it is welcome in the menus of many restaurants. 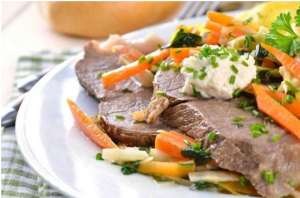 For the holiday in the alpine homes is brought the thought of coziness and warmth aroma of pastries. In Germany, Switzerland, Italy and other mountainous countries, traditional breads are baked, and each region or city is proud of its trademark.

Fondue with meat and vegetables

1 slice of bread from the previous day

salt and white pepper to taste

The bread is soaked in lukewarm water We chop the onion and garlic finely and add the already squeezed bread, minced meat and egg to them in a bowl. Season with salt and pepper and form small balls.

Cut the meat into large cubes. Wash the vegetables and prepare them: cauliflower in roses, zucchini in slices and mushrooms in halves.

Meat, minced meatballs and vegetables are arranged on a plateau. Heat the fat in a special dish for fondue kakelon. The products are pounded on long forks and melted in the fat, and for frying the meat it will take 5 minutes, and for vegetables 2-4 minutes. Fresh bread and sauce of your choice are also served on the table. 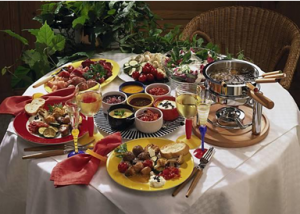 salt and pepper to taste

This Tyrolean specialty is a favorite for Austrians and guests in alpine ski resorts.

We wash the potatoes and boil them. After they cool down, peel them and cut them into slices. Cut the already cooked beef into strips. Finely chop the onion and fry it briefly in a pan or saucepan. Add the meat and potatoes to the already fried onions and season with cumin and oregano.

Fry them over medium heat until golden. In a separate pan, prepare eggs fried in butter. The meat with potatoes is served on a plate, garnished with egg and chopped parsley or green onion. 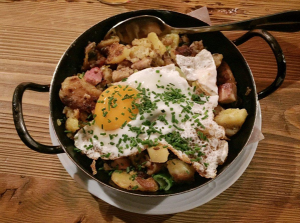 Clean and wash the little things  If you don’t have duck, you can take chicken livers, hearts and watermills from the store. Boil, carefully frothing during cooking and salting. Once cooled, cut into small pieces.

Stew the chopped onion in melted butter. Add the grated carrot and chopped mushrooms and let the stuffing simmer. Add salt and pepper. Stir and add the rice, and after a while the finely chopped trifles.

Pour two or three cups of broth and leave on the stove until the rice absorbs the water. The duck is smeared with salt and red pepper, stuffed and sewn with thread. Sprinkle grease on top. 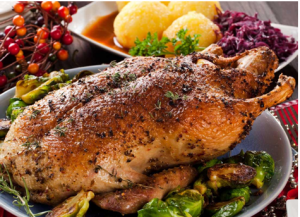