Fondue is a delicious, fantastic dish from Switzerland’s national cuisine. It is not a coincidence that from food for the poor, it has become a specialty among the aristocracy, the artistic circles, and so on.

There are many varieties offered throughout Switzerland and in elite restaurants around the world. Behind this “metamorphosis” stands the long and interesting history of Fondue.

In fact, Fondue is primarily a family dish or a joyous company one. Both the preparation and consumption of this warm, nutritious, tasty and aromatic dish creates a sense of community, warmth, coziness.

All attendees participate in the process, and after that eat together from the common pot where they dip bread. It is interesting that Fondue is prepared on open fire directly on the table, maintained during the meal in order to keep the dish warm. All this is far from the European culinary traditions, but it is popular in Switzerland and it’s a lot of fun for the company.

Fondue is prepared from two or more types of cheese. There are also recipes where the used types of cheese are 5. However, they need mastery in order for the different flavors and aromas to complement, and not some of them to overpower the rest.

The cheese – cubed or grated – is melted in white wine, preferably dry. Melting in the wine is done on a slow fire in a special pot that has previously been rubbed with garlic, the mixture being stirred constantly. A little flour is added to it for thickening, and when it starts to bubble a little, a kirsch – a type of cherry brandy can be added. This variety is usually made with not quite ripened cheese

Spices are according to taste preferences – black pepper, dill, mustard, nutmeg and others. The dish is ready when it becomes creamy. The attendees dip pieces of bread in it with long forks, and this is usually accompanied by a game, because often the somebody’s bread falls in the mix. Then he performs funny wishes of others.

Legends and facts from the interesting history of Fondue

There are several versions of Fondue’s initial history, which give quite different dates for the invention of the dish. Some explorers found the roots of Fondue back to Homer. A song in the Iliad mentions a dish from goat cheese that is grated, wine and an addition of wheat flour. 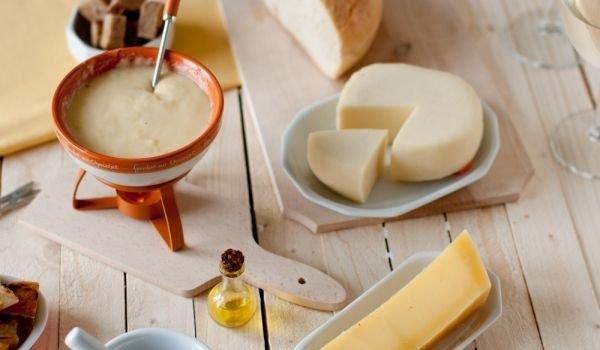 There are also legends that date the Fondue invention a lot closer in the centuries – between the 14th, 16th and 17th centuries, and are related to human practicality in the harsh Alpine conditions in Switzerland.

In this climate, people stocked with cheese and bread that dried out and were not only “difficult to swallow,” but also lost their taste. Such were the stocks of the shepherds who spent a long time in the mountain, a few people per herd because the herds were large. Because of the cold weather the stocks also contained wine.

Apparently, in the evenings around the fire somebody thought of melting the solid cheese in the wine, heated in pot over fire, and then all of them dipped the dry bits of bread, which softened from the mixture and became delicious. “Forks” were long spikes.

There are other legends – for a smart housewife who has used all the products or a late stranger who, dipped the food remains at an inn in hot fat. But they are all focused on the practicality one learns in the Alps.

Of course, it cannot be said exactly when the Swiss started to make Fondue. There is a saved Zurich guide for making wine with cheese from the very end of the 17th century, which means that the Fondue has already become a dish by then.

In 1885, again in Zurich, Fondue was taught in a school of cooking, in whose recipe book the dish was included. This recipe is as close as possible to the modern cheese Fondue.

The traditional Fondue is made of liquefied cheese, which is kept warm during consumption. Over the years, however, this dish has varied in a different combination, from cheese, meat, fish, various seafood, vegetables to chocolate.

Livestock farming in Switzerland is so strong that there simply was no way for the national Fondue dish not to get a variety of fat and pieces of meat.

For it, fat is heated and using a long fork small pieces of meat are fried according to preference.

Knowing that the world famous Swiss chocolate is made from cow’s milk, it is easy to “guess” that the most used meat for Fondue is beef. Naturally, however, other species are also used – pork or chicken.

At the same time, there are so many lakes in Switzerland that fish is traditionally present in the country’s cuisine with numerous dishes. It is also natural for it to be included in Fondue – pieces of fish are fried with the fork in the fat. Seafood is also used – octopus, shrimp, squid, which for Switzerland is not a problem to provide.

Another variant of Fondue uses vegetable broth instead of fat. Then the meat is not fried, but boiled. As it has to be done for a short time, the pieces of meat should be very thin to make cooking fast.

Along with everything here, there is a dessert type of Fondue. For Switzerland, of course, this is the Chocolate Fondue. Milk, black or white chocolate may be used.

The principle is that the pieced or grated chocolate is melted in boiling liquid cream, which has some butter and sugar. The melting is done on reduced heat, stirring. The ready chocolate Fondue is dipped with strawberries, dried apricots, pieces of banana, apple, kiwi – according to the preferences for the fruits. Optionally, chocolate Fondue can be flavored with alcohol, pinch espresso or little herbal  extract.

Fondue is a national Swiss dish, but it is also possible to speak of Fondue regional history. This is perfectly understandable given the specifics of the country. It has a single army, the post and the railways are controlled by the central government, which also carries out international relations, but the state has 26 independent cantons with their parliaments, governments, laws, and so on.

In these areas the population is ethnically diverse. For over 60 percent of people, German is the mother tongue, this ethnicity is mainly in the central and northern parts.

The western parts are populated with Frenchmen – about 20 per cent of the population. To the south are the Italians – about 7 percent, there are other groups, not counting the immigrants. So, the varied history of Fondue depends on historical, economic and social characteristics by region and culinary traditions of the respective groups.

Locally, there are different ways of preparing a Fondue, each with quite significant differences. Among the Italian community, for example, it is a popular option to melt the cheese in milk rather than in wine, using egg yolks. In this case, the preferences for the Fontina cheese, which is traditional for Northern Italy where it has been made for centuries, are also understandable.

This variety of Fondue even has a special name – Fondutta. In addition to being served as a separate dish, it is also used as a sauce for fish, asparagus and others. When talking about the essential differences in the regional history of Fondue, we can also mention varieties in which wine, which generally should be white and dry, is replaced with champagne, cider or even tomato paste.

Naturally, the regional history of Fondue led to some differences in details as well. One of them is the choice of the “leading” cheese used. Sbrinz cheese is popular in the central parts of Switzerland, the Italian Fontina was already mentioned.

Gruyere is a popular cheese in the western parts of the French region.  Of course, the combinations are different, using the Swiss Emmentaler, Appenzell , as well as French, Dutch and others.

2018-02-09
Previous Post: Italian, French and Swiss fondue – similarities and differences
Next Post: Utensils required for the preparation of fondue